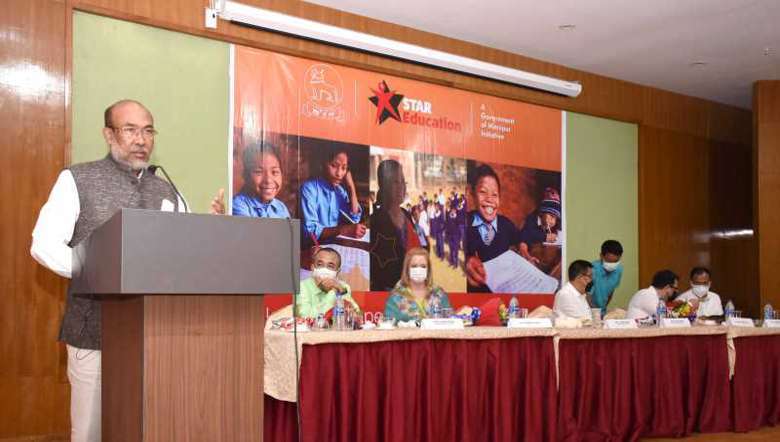 The new education programme was launched at a function organised by the Department of Education (S) at Classic Grande in Imphal.

Speaking on the occasion, the CM said that the motto of the current education system has now changed from the earlier narrow vision of getting a government job to a broader one of creating jobs and serving the nation. The new initiative would assist teachers in better ways of teaching students.

The chief minister maintained that the state government, since its formation, has been working differently to serve its people in a better way.

The government had earlier launched the ‘School Fagathansi Mission’ with an ambitious objective to give renewed thrust towards the improvement of government schools both in terms of physical and manpower infrastructure.

Mentioning that the government has also taken up welfare schemes in many sectors, Biren stated that many youths of Manipur has now started to perform better comparing to other states in different fields. He added that such achievements has been made possible with the zeal on the part of people to do something new and prevalence of a better environment.

He also maintained that the government has always been encouraging the achievements of all the individuals and would be ready to support those who are hard working.

Delivering his presidential speech, Education minister, Sorokhaibam Rajen stated that the education system in the state has considerably improved after the successful implementation of the ‘School Fagathansi Mission’.

To facilitate teachers in taking online classes effectively for higher education, recording studios has been set up in different colleges, he added.

The minister also appreciated the chief minister for his far-sighted vision and initiatives taken up for developing the education infrastructure of the state.

He expressed his hopefulness that the STAR Education Manipur programme would facilitate teachers and students in their teaching and learning process and would also play a key role in developing knowledge of students.

Commissioner (Education), M Harekrishna; secretary to CM,  N Geoffrey; Education (S) director, L Nandakumar; and co-founders of New Globe, Jay Kimmelman and Shanon May; and other officials attended the programme among others.

During the programme, the CM also released a leaflet on STAR Education Manipur and handed over teachers’ computer sets and school management smart phones to the Education (S) director.