Manipur Governor Ganesan said that it is a great pleasure to release four Special Covers of the Department of Post on the Unsung Heroes of Manipur who had sacrificed their lives for the Motherland. 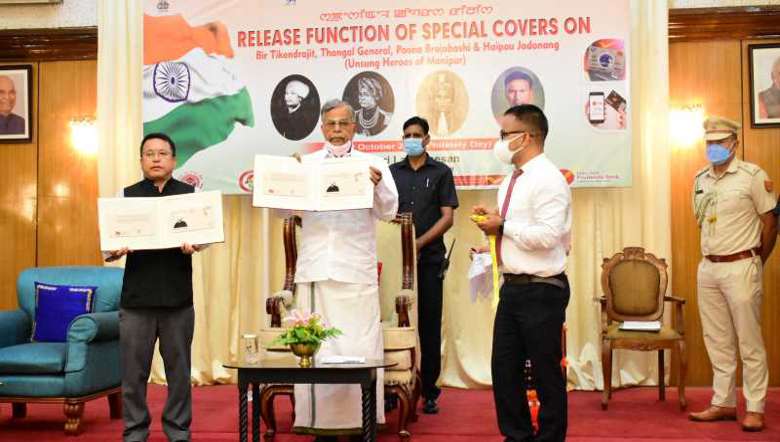 Manipur Governor La Ganesan on Wednesday released the Special Cover on the Unsung Heroes of the state - Thangal General, Bir Tikendrajit, Paona Brajashi and Haipou Jadonang of Manipur - at Raj Bhavan. The function was organised by the Postmaster General, North East circle.

Speaking at the function, Ganesan said that it is a great pleasure to release four Special Covers of the Department of Post on the Unsung Heroes of Manipur who had sacrificed their lives for the Motherland. During the freedom struggle millions of leaders and freedom fighters sacrificed their lives to defend and free India from the clutches of the British tyranny. He also said that, the struggle which started with the death of Mangal Pandey and great rebellion in 1857 finally ended on August 15th 1947 when India emerged as an independent Nation.

He further stated that, even in the tiny State of Manipur, people will never forget the sacrifices made by these leaders to uphold our freedom. However, amidst our praises for the greatest of the leaders, known and unknown, we often forget the contributions of some unsung heroes. These freedom fighters were as fierce as others and had the courage to stare death in the eyes, and at last dedicated their lives for the cause of Independence. Let us unitedly pay tribute to these freedom fighters by devoting some time for them, he added.

The Governor urged that, the efforts of the office of the Postmaster General, North East Circle to have four Special Covers of the Department of Posts on the unsung Heroes of Manipur like Thangal General, Bir Tikendrajit, Paona Brajashi and Haipou Jadonang who sacrifice their lives for the State are indeed, commendable and praiseworthy and also said that he have fully confident that these four covers will earn popularity not only in the North East States but all the States of the country.

The Governor advised the Postmaster General, North East Circle that, although the names of the 4(four) Unsung Heroes in the postal cover is commendable and praiseworthy but not sufficient, so they should try to get it covered in school and college text books so that students’ and younger generation learn lesson from their lives and the sacrifices they made for the State as well as our Nation.

The function was attended by Som Kamei, Postmaster General, North East Circle,  L Tiken Singh, Superintendent of Post, Manipur and staff from the Department of Post.