No surprises from JP Nadda

IFP Editorial: JP Nadda did not have anything new to offer post 2022 to the Manipur public during his visit. The people have had enough of the oft-repeated bandh-blockade free atmosphere and hundreds of ‘projects’ being taken up in the state. 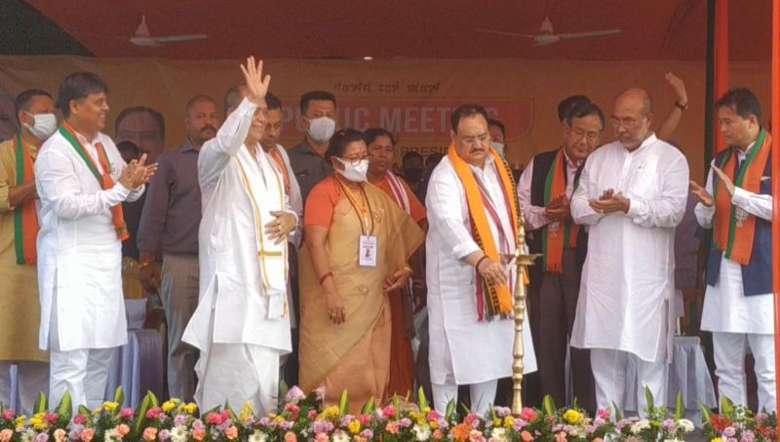 When National BJP President JP Nadda announced his Imphal visit, it generated lots of hope and speculation in political circles. But, there were no surprises and it went by the script. President Nadda, in his public speeches, was all-praise for Chief Minister N Biren for bringing back ‘peace and development’ to the state and well-oiling the delivery mechanism of various state sponsored benefit schemes, though we may never know what transpired in the closed-door meetings with party functionaries and legislators. Yet, it does not guarantee anything on the leadership issue. The question whether N Biren Singh will be the Chief Ministerial face or not in the run-up to the 2022 elections still remains hanging in the air. In the recent Assam elections, no CM face was projected and the post ultimately went to Sarbananda Sonowal’s powerful deputy Himanta Biswa Sharma.

On the other hand, JP Nadda did not have anything new to offer post 2022 to the Manipur public during his visit. The people have had enough of the oft-repeated bandh-blockade free atmosphere and hundreds of ‘projects’ being taken up in the state. People can certainly feel certain positive changes in the air after BJP came to power. Bandh blockades at the drop of a hat has become a thing of the past, fake encounters are almost nil, and the hill-valley divide has been bridged to some extent. At the same time, the people could also sense an overbearing intolerant attitude towards detractors and criticism of its policies and actions. And it would be too much for BJP to expect the general population to focus only on the positive aspects and turn a blind eye to the negatives during its rule. People has not forgotten the episode of midnight raid of Manipur University campus and the crackdown on civil society organisations, its wavering stance on the issue of shifting border pillars in the Indo-Myanmar boundary line, its inability to do away with the Armed Forces Special Powers Act despite the oft-advertised improvement in law and order situation, the menace of price hike in petroleum products, its alliance with NPF and the reluctance to uproot NSCN (I-M) camps within the territory of the state, and so forth.

Union Environment Minister and incharge of Manipur 2022 elections Bhupendra Yadav spelled out the party’s strategy for the ensuing assembly elections as he said that the party will fight on the development agenda and looking for a two-third majority in the assembly. We are still not certain on how BJP is going to fight the elections early next year as its allies NPP and NPF seem bent on fighting it alone instead of pre-poll alliance. While NPP chief and Meghalaya Chief Minister Conrad Sangma came to Imphal and announced that the party is going to put up more than 30 candidates in the 2022 assembly elections, Deputy CM Y Joykumar is talking about 40 candidates and forming the next government. On the other hand, given the ball thrown by the Chairman of Hill Areas Committee for amendment of the ADC Act and the churning it had caused, NPF seems an unlikely partner in the elections. Currently, it has taken into confidence many hill MLAs including disgruntled elements in BJP and camping in New Delhi.