Your valour has shown India’s strength to the world: PM Modi to Indian soldiers in Ladakh

Prime Minister Narendra Modi said that those who are weak can never initiate peace while adding that bravery is a prerequisite for peace. 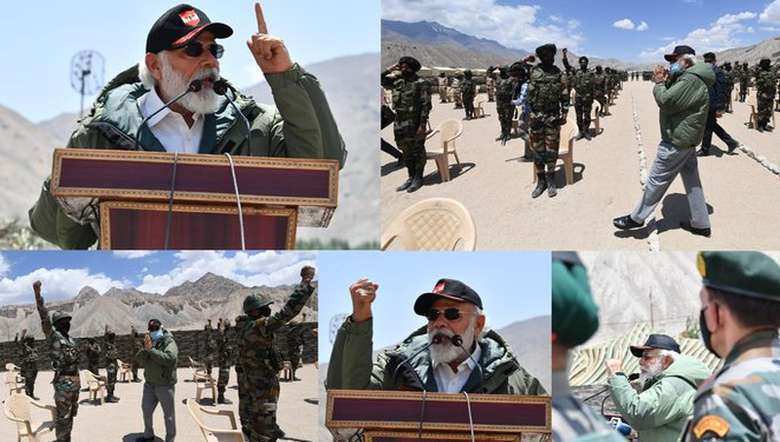 Prime Minister Narendra Modi on a surprise visit to Ladakh with Chief of Defence Staff Gen Bipin Rawat early Friday said the valour shown by the soldiers has shown India’s strength to the world.

“Your courage is higher than the heights where you are posted today. Your arms are as strong as the mountains that surround you... The resolve of  ‘Atmanirbhar Bharat’- self-reliant India, becomes stronger because of your sacrifices. The valour shown by you has shown India’s strength to the world,” the prime minsiter said while interacting with the soldiers at the Nimu forward post in Leh.

Those who are weak can never initiate peace, Modi said, adding bravery is a prerequisite for peace.

“India's enemies have seen both your fire and fury. Those who are weak can never initiate peace. Bravery is a prerequisite for peace. Your will power is as strong and firm as Himalayas; the whole country is proud of you."

Modi arrived at Leh around 9.30 am Friday and interacted with personnel of the Army, Air Force and Indo-Tibetan Border Police (ITBP) at the Nimu forward post. Nimu is among the toughest terrains, located on the banks of the Indus and surrounded by the Zanskar range.

Recently, Indian troops faced a violent faceoff with the Chinese troops at Galwan Valley in Eastern Ladakh along the Line of Actual Control that left 20 Indian soldiers and 43 Chinese troops killed on the night of June 15.

As tensions between India and China heightened along the Line of Actual Control (LAC) in the past few days, India on June 30 announced a ban on 59 Chinese apps.