The rally was attended by nearly 200 affected families of the national highway expansion into double lanes. 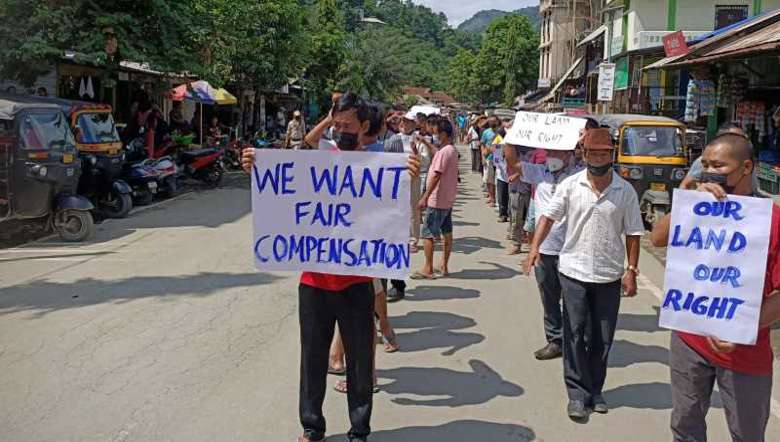 Demanding to release compensation after conducting re-assessment and re-estimation of lands, the Affected Landowners Committee Longmai carried out a protest rally at Longmai Noney Bazaar, followed by a public meeting on Monday.

Addressing the media persons at the sideline of the protest, committee’s spokesperson, Lanthuigong Kamei said that they have been urging the authority concerned to provide compensation of the land plots affected by expansion National Highway-37.

However, they failed to fulfil the demand even after repeated appeals were made. Condemning the irresponsible act of the authority concerned, the agitation was carried out.

He further said that there is a huge difference in the demarcation of land done by BRO in 2015 and present demarcation done by NHIDCL. This has resulted in many issues and misunderstandings. As such, the villagers are demanding to provide land compensation after proper verification.

During the protest rally, villagers used placards with slogans ‘we want re-assess, re-estimate’, ‘we want spot verification’, ‘no disbursement until problems resolved’, ‘we want fair compensation’, ‘we want transfer of Noney DC’ and others.

The rally was attended by nearly 200 affected families of the national highway expansion into double lanes.