The PM described the Jal Jeevan Mission as a movement to empower women and rural India with Jan Bhagidari and active participation from everyone. 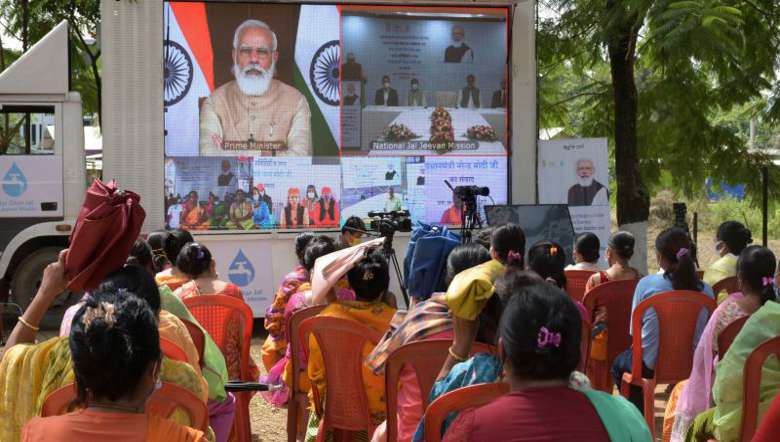 Prime Minister Narendra Modi interacted with Gram Panchayats and Pani Samitis across the country including Manipur on Jal Jeevan Mission through video conferencing on Saturday.

Interacting with Pani Samiti chairperson Leitanthem Sarojini Devi, Prime Minister was informed that earlier water was available only at great distances and in long queues.

Now the situation has improved as all households have piped water. She said that becoming an open defecation free and fully covered village has led to better health of the villagers. She also informed that regular testing of water quality is a norm in her village, and five women have been trained to do that. The Prime Minister said that the government is working consistently for bringing ease of living in the lives of people. He expressed satisfaction that real change is happening in the Northeast.

The PM described the Jal Jeevan Mission as a movement to empower women and rural India with Jan Bhagidari and active participation from everyone.

Agenda of the Gram Sabha and Samvad include to sensitise the Gram Panchayat VWSC and Gram Sabha that drinking water supply is essentially a service delivery and Jal Jeevan Mission a lifetime opportunity, to sensitize about the importance of drinking water resources, clean tap water, water conservation, water quality and the kind of water supply system suitable for the village. The peoples campaign for formulation of Gram Panchayat development plan (GPDP) will be held from October 2 to January 31, 2022.

During his interaction with Gram Panchayats and Pani Samitis across the country on Jal Jeevan Mission through video conferencing, Modi said the government has introduced the Jal Jeevan Mission mobile application to facilitate answering queries on the quality of tap water and its supply and the surveillance framework related to the scheme. Stating that clean water and water scarcity are global issues, he urged the people of India to realise the importance of clean water. He also launched Rashtriya Jal Jeevan Kosh, where any individual, institution, corporate, be it in India or abroad, can contribute to help provide tap water connection in every rural household, school, Anganwadi Centre, Ashramshala and other public institutions.