CM Biren urged the people of the current generation to follow Irawat’s ideals to maintain unity and eradicate inequality among people. 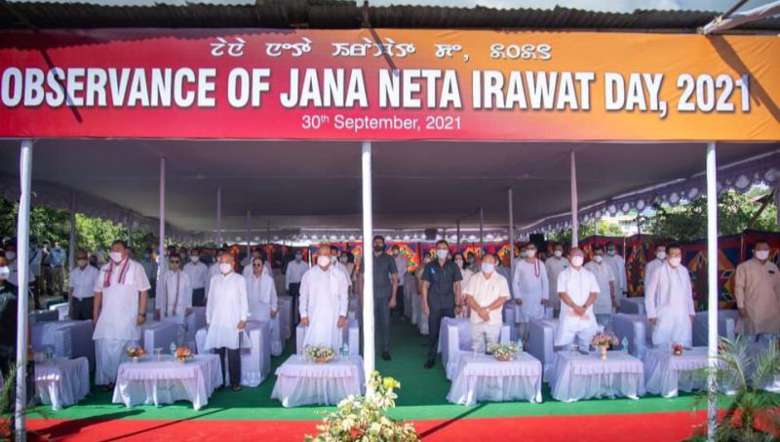 Speaking to the media persons, the chief minister said that Irawat could lead a luxurious life as he belonged to a respectable and well-to-do family. However, he left everything and decided to work at the grassroots for the needy and downtrodden people.

As a humble tribute to his efforts and sacrifices made for the people, the present government began celebrating the day as a state function from 2018, besides erecting his statue and developing Irawat Square at Thangmeiband, he added.

Biren urged the people of the current generation to follow Irawat’s ideals to maintain unity and eradicate inequality among people.

Responding to a query regarding Athuan Abonmai’s murder case, Biren informed the media persons that understanding people’s sentiment and seriousness of the case, the state government had written twice to the authority concerned of the Central government to hand over the case to the National Investigation Agency (NIA). Stating that a copy of the FIR of the case had also been attached in the last letter, he further said that he would also talk to Union Home Minister Amit Shah regarding the matter during his Delhi visit that begins on Thursday.

Meanwhile, Loukhaoubi (farmerettes) of Takyel area were felicitated on Thursday by senior ophthalmic surgeon of University Hospital Derby and Bruton HNS Trust, United Kingdom, S Krishnananda, in connection with the observance of the 125th birth anniversary of Lamyanba Hijam Irabot.

Speaking to the media persons on the sidelines of the observance, Krishnananda, who is also a BJP intending candidate of Patsoi assembly constituency, highlighted the farsighted vision of Irabot in making Manipur an egalitarian society and a self-reliant state.

The felicitation programme was a simple act to honour and encourage the farmerettes, he said adding that the farmers play a vital role in the struggle to make Manipur a self-reliant state.

Pointing out the importance of self-reliance in moving towards development, Krishnananda apprised the public that following the food-steps and ideology of the great leader Irabot is the key to development and bringing an egalitarian society.

He also asserted that there is a need for various welfare and developmental progress to be taken up in the state and further extended his assurance to give his maximum effort in uplifting the society and address the grievances of the public.

In connection with the observance of the 125th birth anniversary of Hijam Irabot, LINTPK felicitated the inmates of the Old Age Home, Mongsangei in Imphal West with small token of gifts on Thursday.

Speaking on the occasion, SSUM president, S Yaima recalled the various works taken up by Irabot for the welfare of the society with the spirit of patriotism.

Asserting that Irabot is the role model for all positive activism, he emphasised the need of following the footsteps of the leader in shaping a better society in all aspects.

Yaima also pointed out blunders in the state in terms of socio-economic, education sectors and others and stated that the three student bodies would exert maximum effort in uplifting the society and mitigating the grievances of the student's society.

Floral tributes were offered to the portrait of Hijam Irabot by the student bodies, inmates and staff of the old age home.

The distribution of masks and shields were taken with a view to safeguard the health of the sanitary workers and was a service activity of Lions Clubs International, stated a release.

Later, the members of the two Lions Clubs planted saplings at Tendongyan as a part of the Environment project. About 50 saplings were planted, it added.

In continuation of its series of activities, members of Nature Club, Haoreibi carried out a cleanliness drive in Haoreibi, Imphal West on Thursday in observance of the 125th birth anniversary of Lamyanba Hijam Irabot by strictly maintaining COVID-19 protocols.

Besides the cleanliness drive, listening to patriotic songs and narratives on life and works of Hijam Irabot was another main feature of the programme, stated a release issued by programme convener L Sanju Singh. The members revisited his sacrifices and contributions to society, it added.

The food items and the roofing sheets were donated by BJP intending candidate of Patsoi AC Wahengbam Dineshchandra. Aids were also extended to various local clubs situated within the Patsoi constituency. Monetary assistance was also extended to a kidney patient from Yengkhom Leirak who has been undergoing dialysis for a long time.

Speaking to the media, Dineshchadra emphasised the ideology and effort of Irabot for the well-being of the society.