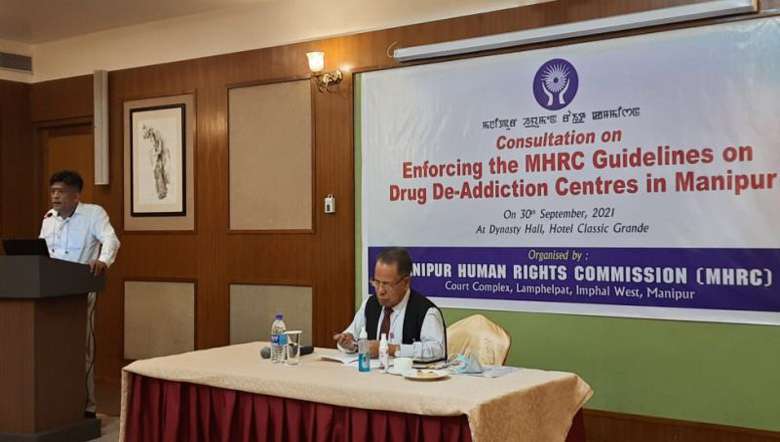 The complaints were raised during a consultation workshop held at Hotel Classic Grande in Imphal.

Giving the opening remark, MHRC law officer Wareppam Basantakumar said that MHRC has conducted inspection drives at drug de-addiction centres of the state and found that majority of the state's drug de-addiction centres are without basic infrastructures; some are running without registration certificates, defying minimum guidelines laid down by the Union Ministry of Social Justice and Empowerment.

The Commission also noted some practices such as forceful pick-up of drug users and lodging them at centres, he said. Few inmates of some centres also raised complaints against the police personnel for involvement in forceful pick-ups, he said, adding such allegations are not overlooked by the commission.

During the consultation, one victim gave testimony on how he was forcefully picked up and lodged at a centre. He also urged not to treat the drug users as criminals or animals and appealed to recommend not picking them up by force.

Community Network for Empowerment (CONE) president RK Nolinikanta spoke on community perspective on current trends of drug treatment in Manipur. He said that there are incidents of sharing money to local club volunteers with police personnel for picking up the drug users. He raised concern that this practice could become a trend if not stopped.

Local clubs have no power of arresting or picking up the drug users and handing them over to police, he said. “Sometimes, some local clubs make videos of drug users and upload them on social media. These acts violate the rights and humiliate the users,” he added.

State level coordination agency (SLCA), Manipur director A Jayanta talked on drug treatment in line with the guidelines of the Ministry of Social Justice and Empowerment.

Representatives from district police spoke on enforcing the MHRC guidelines on drug de-addiction centres in Manipur.

Advocate of the High Court of Manipur and special rapporteur of MHRC M Ibohal gave a speech on the role of MHRC for the promotion and protection of human rights in Manipur.

Acting chairperson of MHRC, Khaidem Mani as a rapporteur of the consultation explained about the human rights and human rights violations.

MHRC on August 28, 2020 had organised a consultation to discuss the role of rehabilitation centres in dealing with drug addicts. After the consultation, the commission had considered some guidelines to ensure the rights of drug users while undergoing treatment at the de-addiction centres.

As per the guidelines, NGOs and De-addiction centres should be mandatorily registered under the existing Act of the Parliament or State Assembly or any other regulation framed for this purpose.

It mentioned that the Social Welfare department, government of Manipur shall examine the legal document (s) and registration certificate of the De-addiction Center/Rehabilitation Centre.

No Objection Certificate (NOC) may be provided only after required documents and registration certificates are duly examined, the guidelines stated. Space, sanitation, hygiene etc. shall also be taken into consideration while infrastructure and manpower of the De-addiction/Rehab Centre shall be taken into consideration in order to accommodate inmates and their effective treatment, it mentioned.

As per the guidelines, no de-addiction rehab centre is to treat patients beyond their treatment capacity. It stated that any referral from police, local club, meira paibi etc other than the parent or guardian, the patient/drug user shall be produced before an Executive Magistrate or police officer not below the rank of Deputy Superintendent of Police.

It stated that free, prior and informed consent of the patient or drug user shall be obtained before his or her admission. If the patient or drug user is a minor then, his/her parent/guardian should give free, prior and informed consent to any De-addiction/Rehab Centre, it mentioned. Physical and mental torture or any form of human right violation should not be allowed under any circumstances, stated. Any complaint in this regard shall be thoroughly inquired, as per the guidelines.