Floral tributes were paid to Hijam Irabot on the occasion of his 125th birth anniversary. 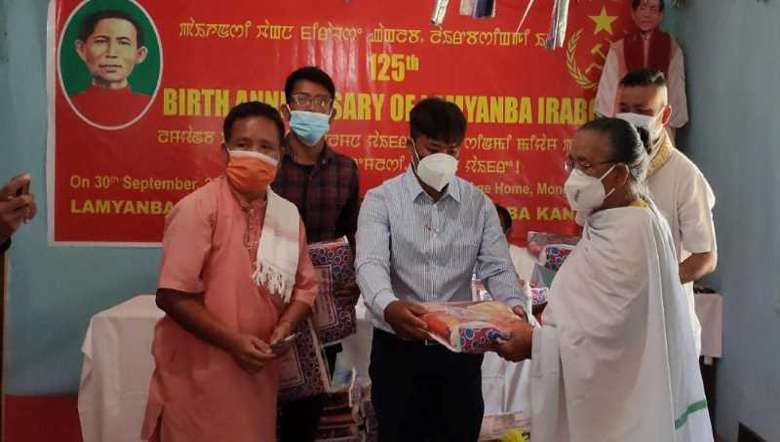 Loukhaoubi (farmerettes) of Takyel area were felicitated on Thursday by senior ophthalmic surgeon of University Hospital Derby and Bruton HNS Trust, United Kingdom, S Krishnananda, in connection with the observance of the 125th birth anniversary of Lamyanba Hijam Irabot on Thursday.

Speaking to the media persons on the sidelines of the observance, Krishnananda, who is also a BJP intending candidate of Patsoi assembly constituency, highlighted the farsighted vision of Irabot in making Manipur an egalitarian society and a self-reliant state.

The felicitation programme was a simple act to honour and encourage the farmerettes, he said, adding that the farmers play a vital role in the struggle to make Manipur a self-reliant state.

Pointing out the importance of self-reliance in moving towards development, Krishnananda apprised the public that following the food-steps and ideology of the great leader Irabot is the key to development and bringing an egalitarian society.

He also asserted that there is a need for various welfare and developmental progress to be taken up in the state and further extended his assurance to give his maximum effort in uplifting the society and address the grievances of the public.

During the programme, floral tributes were offered to Hijam Irabot.

In connection with the observance of the 125th birth anniversary of Hijam Irabot, LINTPK felicitated the inmates of the Old Age Home, Mongsangei in Imphal West with small token of gifts on Thursday.

Speaking on the occasion, SSUM president, S Yaima recalled the various works taken up by Irabot for the welfare of the society with the spirit of patriotism.

Asserting that Irabot is the role model for all positive activism, he emphasised the need of following the footsteps of the leader in shaping a better society in all aspects.

Yaima also pointed out blunders in the state in terms of socio-economic, education sectors and others and stated that the three student bodies would exert maximum effort in uplifting the society and mitigating the grievances of the student's society.

Floral tributes were offered to Hijam Irabot by the members of student bodies, and inmates and staff of the old age home.