CM Biren said at the SBI Grand Loan Distribution Mela that construction of groundwater pumping sites for irrigation purpose in the state amounting to around Rs 360 crore is in the pipeline. 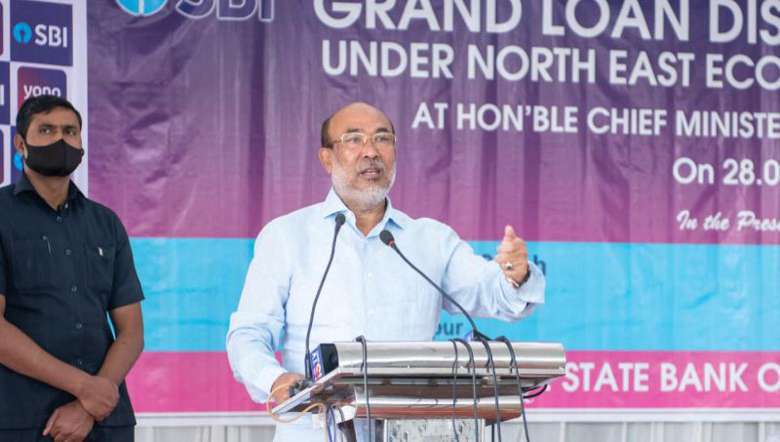 Manipur will be ready for double and triple cropping once the groundwater project for irrigation purpose is completed, Chief Minister N Biren Singh said on Tuesday.

The chief minister was speaking at the SBI Grand Loan Distribution Mela under the North East Economic Revival Plan held at his secretariat complex in Imphal.

Biren said that construction of groundwater pumping sites for irrigation purpose in the state amounting to around Rs 360 crore is in the pipeline.

Highlighting the various efforts taken up by the state government to make Manipur self-reliant in food products, Biren said that the import quantity of fish in the state had reduced to 14 metric tonne from 20 metric tonne annually in the last four years.

The local products of strawberry has become sufficient for the state, he said, adding that the government is giving special packages and provisions to farmers for establishing fish, poultry, piggery farms and other horticulture farms.

If the state government goes in this present tempo, the state will become self-reliant in food items within a few years, Biren added.

Asserting that the state government had sufficient funds for its Start Up scheme, Biren asked the unemployed and potential youths to take the opportunity of the scheme to generate livelihoods and employment by establishing a micro or small-scale industry.

The Start Up scheme is now available 365 days and so far the government had received around 7,000 applications, said the chief minister.

Biren informed that Manipur tops in the category of small state in running of Micro, Small and Medium Enterprises (MSME) with a total of around 13,000 units. With the aim to enhance those units, the state government in collaboration with nationalised banks will be taking up a survey within a week to give them upgradation, he added.

The state government is also in the process of rolling out a door to door healthcare service, including testing facilities of seven items, said the chief minister.

Free medicines will be distributed during the process and for severe patients, necessary treatments will be given under the Ayushman Bharat scheme or the CMHT, he informed.

Biren further informed that the state government will also be inaugurating a free UPSC coaching centre within a week by enrolling at least 200 students.

Moreover the government is targeting to provide drinking water facilities to at least 80 per cent of the households in Manipur by December, the chief minister said.

The strategy of the government is to make the public healthy, educated and live a courageous and dignified life, he added.

Talking about the "Go To Hills mission 2.0", he said that the government is all set to continue the mission in the remaining hills districts of Manipur.

"No one can stop the government from taking up various welfare works of the public," Biren said.

The Grand Loan Distribution Mela is targeting to give loan amounting from Rs 10,000 to Rs 5 lakh to at least 10,000 beneficiaries. During today's programme, loan sanction letters were distributed to 104 beneficiaries.