The road transport minister said there will be quantum jump in development of tourism, economic and international connectivity of the region. 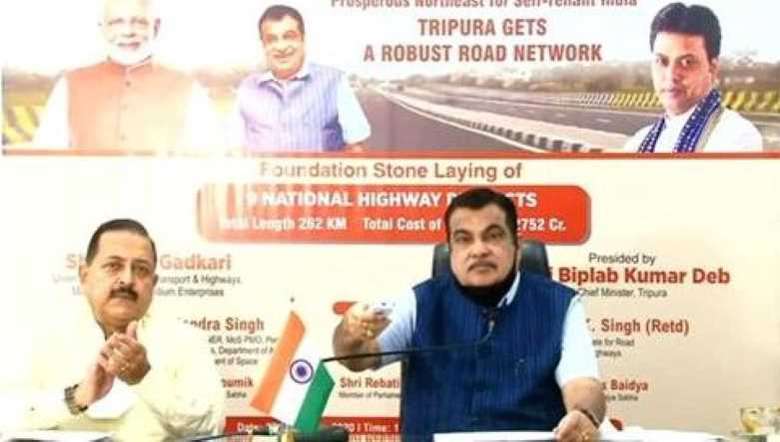 The Road transport and Highways Ministry said in a release that the event was presided by Chief Minister Biplab Kumar Deb, in the presence of Union MoSs Dr Jitendra Singh and Gen (Retd) Dr V K Singh, Ministers from the state, Members of Parliament, MLAs and senior officers from the Centre and the state.

The chief minister said the new roads will be a boon for the people as these will provide all-weather connectivity in the hilly and rainy state.

Gadkari also spoke on the occasion and said that nearly 300 km NH length has been added in Tripura in the last six years. Today, there are over 850 km of NHs in the state. He said that roads worth Rs 8,000 crore are being constructed in Tripura, and Rs 365 crore have been disbursed towards land acquisition cost in the State between 2015 and 2020

Gadkari said, very soon two important projects are completing in the state. These are the Feni Bridge and the Udaipur-Agartala road. The 49 km 2-lane with paved shoulder Udaipur-Agartala road worth Rs 750 crore is completing next month. The 1.8 km long Feni Bridge between Sabrum on Indian side and Ramgarh on the Bangladesh side costing Rs 129 crore will be completed by December this year. The bridge is important from social, economic and defence points of view, he said. The distance between Sabrum and Chittagong is 75 km, and the bridge will ease the transportation of goods from Chittagong and Kolkata ports. An integrated check post is also proposed near Sabrum.

The minister said the construction of the RCC bridge over river Feni will improve connectivity to the international Border with Bangladesh. The 4-lane bypass on western side of Agartala City is under DPR preparation that will further improve the connectivity of NH-8 to NH-108B in the state of Tripura, reduce traffic congestion in Agartala city, and connect Matabari from Airport. The connectivity of Agartala city to Assam Border through NH-108B, 208 & 208A will provide shorter length connectivity.

The upgradation work for Agartala to Khowai (NH 108B) and Kailashahar to Assam Border (NH-208A) has already been awarded and upgradation of balance section of Kailashahar to Khowai (NH-208) has been proposed under JICA funding. Bids for this section have already been received and work is likely to be awarded very soon. He added that the 4-laning of NH-08 from Agartala to Churaibari - the lifeline of Tripura - is under DPR preparation, which will provide faster and hassle-free Inter-state connectivity with Assam and other States with Agartala.

The minister also said that DPRs for four projects of 367 km worth Rs 7,523 crore are under preparation for the state. He said, a sum of Rs 11 crore has been released to the state under CRIF, and further a sum of Rs 20 crore will be released soon after submission of the utilisation certificate from Tripura, the ministry stated.

He said, as a Minister for Development of North Eastern Region, his Ministry is also chipping in with all available resources to make the NE region as a new model of development for the entire country.

Describing Tripura as a Gateway of the “Act East Policy” of the Central Government, Dr. Jitendra Singh said that soon “we are also going to have a train to Bangladesh from Tripura heralding a new chapter and opening new vistas in the development of this region by providing the entire region access to the seaports”. This will boost the trade across the borders especially with our eastern neighbours by leaps and bounds, he added.

Union Minister of State for RTH Gen (Retd) Dr V K Singh said the projects, on completion, will provide faster and hassle-free inter-state and international connectivity to Bangladesh, and will be a major stride towards strengthening tourism sector of the State. The new projects will provide better connectivity, fast and safe movement of traffic to various tourist places, historical places and religious places in the entire State. They are likely to generate large number of employment and self-employment opportunities to the unskilled, semi-skilled and skilled manpower of the region.

Singh also said the projects will reduce travel time and maintenance cost of the vehicles and saving of fuel. Implementation of the project would result in enhanced socio-economic conditions of the locality. These will improve transport of agricultural goods and access to greater markets, thereby reducing the cost of goods and services. These will also create easy and speedy access to health care and emergency services. In a nut shell, after completion of the above projects there will be quantum jump in the development of tourism, economic and international connectivity of this region. Finally, it will give impetus to the GDP of the state of Tripura.