The value of 'R' in managing Covid-19 transmission

The management of the disease in Manipur is unscientific and based on conjectures, presumptions and surmises. 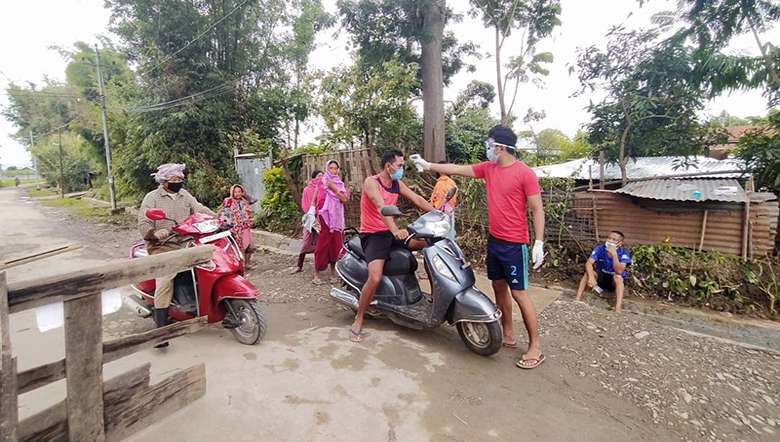 In any epidemic, epidemiological models were utilised for forecasting and projecting the likely spread to enable to plan and implement strategies to mitigate the epidemic. Covid-19 is no exception and the need for a reliable model is all the more important in view of the unprecedented scale and nature of the disease.

Scientists and researchers have used various models to enable to predict the maximum number extent of cases and the time of peak. Incidence, the rate of new cases over time provide as an alternative for risk assessment but does not provide any metric for the progression of the epidemic or evolution of the epidemic. One measure of viral spread is the basic reproduction rate (R0) that is the average number of secondary infections caused by a primary case and is generally used to characterise the transmissibility potential of a disease in a completely susceptible population and can be determined at the beginning of the epidemic say from a couple of days to one or two weeks.

However, during an ongoing epidemic lasting more than this period, “time dependent’ Reproduction number which is also called the “effective Reproduction Number” (R) can be estimated and used to characterise transmissibility once certain proportion of the population has been infected and is resistant or immune. It provides information on the potential of the epidemic spread at a given time “t” under the control measures in place. Regular and frequent measurement of “R” in different settings is necessary to understand the trajectory and the real time assessment of the magnitude of the epidemic. It is also an important parameter to determine the effectiveness of the current interventions and provide room for planning additional interventions as considered necessary.

Using the generation time interval which is the time difference between infection time of an infected person and the infector, the measure of disease transmissibility can be estimated. Serial interval time is the time between start of the symptoms in the primary patient or infector and the onset of symptoms in the patient receiving that infection (infectee) from the infector. As the serial interval is observable while the generation interval is not; serial time interval is usually used for calculation of reproduction number.

When the reported cases are only among the returnees in Manipur, it is not possible to determine the R value. But since the fourth week of July there have been reported cases among the local population without any travel history; by this time efforts should have been made to calculate the R value. But it seems that no efforts have still been made towards this end. Hence, the management of the disease in Manipur is unscientific and based on conjectures, presumptions and surmises.  The assumption that the peak transmission may come sometime in October/November is based on thumbs rule from the experience of other nations and states of the country and it is not based on hard scientific data or analysis. The claim that there is no community transmission in Manipur by keeping quiet as if it will go away is not the way to handle this serious epidemic. The epidemic is real and just can’t be wished away. One cannot act like an ostrich, burying its head when in danger in the sand thinking that the danger will go away. We have to hold the bull by the horn.

For India, Marimuthu et al published an article “Modelling of reproduction number for COVID-19 in India and high incidence states” in Clinical Epidemiology and Global Health in June wherein the various methodologies for ascertaining the R value was mentioned and the methods adopted by them and they had used “RO” package in R software version 3.6.2 (Obadia et al in BMC Med Inf Decis making 2012, Dec 18.12.147). The paper discussed the constraints while deriving the R value and it was observed that in almost all the states there was significant change in R during March, 2020 and  observed that this was perhaps due to cluster spread in pockets. The results of the assessment indicate that the baseline R0 for India is 2.379 (95% CI: 1.377, 1.384). The R value from March 2-8 was 3.2 and it remained around 2.0 for three weeks from March 9-29 and started declining till it reached around 1.3 in the following week. This suggests that the transmission rate is stabilising and by the first week of April it was around 1.29.  To control the spread the value of R must be <1.

Why is R important? Based on the value of R, the intervention may be altered to suit the situation. If possible, R value should be determined for the state as well as for each district. The constraint in some of the districts may be insufficient data but that should not deter working out the R value as it should be the most important tool to determine the type and nature of intervention. In many developed countries, once the value of R goes below 1, activities were opened up but if it climbs above 1, calibrated restrictions are imposed in specific areas. Like restricting a crowd of more than 5 persons; or limiting interaction between not more than 2 families, etc. The intervention need to be calibrated and tailored made for specific region depending on the value of R. Manipur need not have a uniform intervention and such intervention may be limited to a district which may be taken as a unit for intervention. As mentioned earlier, the concept that India is a homogenous nation and one specific intervention will serve throughout the country is unscientific and illogical and can hardly succeed.

The combat against Covid-19 must be based on science and science only and not on some mumbo-jumbo or wishful thinking. The gagging of the state doctors from speaking out in public and now even encompassing college teachers ensures that nothing comes out, except the daily report and press releases. No one can say with confidence whether there is community transmission in the state or not as there is no such declaration though the data points towards this. The too much emphasis on low positivity rate, low mortality rate and higher recovery rate which has limited relevance is like providing pain killer to the last stage cancer patient. The figures of positivity rate and recovery rate fluctuate daily and have no relevance in working out a strategy for intervention. The recovery rate will be high in India as it has a large youth population so will be that of the Mortality rate which should be lower because of the same reason. Improvement in the figures of the positivity and recovery rates will depend on new reported cases; which are not very relevant when the National Sero Survey point to 82 to 130 infected persons undetected for every reported case by May 2020.

The state should have a scientific policy for working out a strategy to combat the disease and should not blindly follow what the centre does or the intervention is based on totally unscientific ways. The epidemic must be fought through science and not by banging the pots and pans, or switching on and off light. As at present the most relevant data for a scientific way to combat the epidemic is to have the value of R for each week for the state as a whole and for every district. The state has a number of competent Public health experts and Bio-Statisticians in both the Medical Institutions and the Directorate and a small committee should be formed to provide the guidance to work out the R value every week and it should be made to suggest the interventions required for each district. Any concerned citizen would like to have their recommendations public; in other words transparency must be the hallmark as everyone in the state has a stake. Let the state work out the data for scientific intervention. Or else it may be like the Emperor in Hans Anderson’s fairy tale “The Emperor’s New Clothes”.