The arrest and seizure took place in different operations at different places, including Machi, Moltuk, Kakching and Senapati 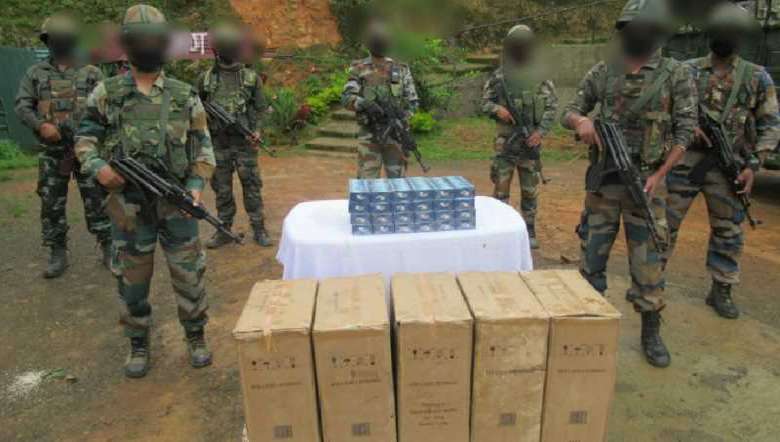 More than six men were arrested and large consignments of 55,500 WIN cigarettes packets and 920 Godzilla coil packets were seized by the Assam Rifles personnel in various parts of Manipur on Friday-Saturday, according to sources.

The seizure took place in different operations at different places, including Machi, Moltuk, Kakching and Senapati, the IGAR (South) said in a release.

In Moltuk area on Saturday, 16,000 packets of WIN cigarettes were seized by the troops during a search operation in the area, said the IGAR (South) in the release.

The seized items, which were found hidden inside the vegetation, were handed over to Chandel police station, it added.

In Machi, in yet another incident on the same day, AR troops intercepted a vehicle but the occupants fled. As many as 2,500 packets of WIN cigarettes were found in the vehicle which were seized by the troops and handed over to Machi police station, the release added.

On Friday, AR troops intercepted three vehicles, a Tata 407 MN 01 4690, a Bolero pickup vehicle MN 01 AG 2069 and a Burmese bike (Liew) without number. On checking, they were found carrying 37,000 packets of WIN cigarettes and 920 packets of Godzilla coils without valid permit, the IGAR (South) said.

The four arrested along with all the items and vehicles were handed over to Machi Police Station, the IGAR (South) said added.

The vehicle was driven by one Md Tarique Ahmed, 30, son of Md Siraj Ahamed of Lilong Haoreibi Leihaokhong, along with Sayed Wahidur Rahaman, 49, son of Sayed Noor Rahaman of Lilong Turel Ahanbi Mathakyangbi Leikai, it added.

On checking the vehicle, 13, 500 cigarette boxes, packed in 27 boxes, were found concealed inside the vehicle covered by a red tarpaulin, it continued. On questioning, the driver stated that the items belonged to Sayed Noor Rahaman, it said.

The release further said that the items were seized and the duo were arrested by observing formalities and handed over to Custom office for further necessary legal action. Necessary action was also taken up against the arrested persons for breaking lockdown guidelines, it added.

In Moreh, a police commando team under the supervision of SP Tengnoupal Th Vikramjit arrested a man and seized drugs worth Rs 2 crore on Friday around 7.30 am. The team, on routine checking at Kondong Lairembi Check Post Chikim village, intercepted a white Wagon R car bearing Reg. No. MNO5A-7824 that was coming from Moreh towards Imphal.

On thorough checking of the car, the team found 5,000 pieces of WY tablets and 75 packets of brown sugar weighing 958 gms, approximately amounting to Rs. 2 crore in the international market along with one individual. The arrested individual has been identified as Thangjalet Khongsai, 49, son of (L)Thonglhun khongsai of  Khenjang village of Chakpikarong sub division, presently staying at Moreh Ward No IX.

In Senapati on Thursday, the Assam Rifles seized a huge quantity of cigarettes and other contraband worth lakhs in two separate operations and saved the life of a snakebite victim, said a press release by IGAR (South). Seven people were apprehended in connection with smuggling of contraband in the two incidents, it said.

Troops of Assam Rifles moved to village Gamphazol in Senapati district and conducted checks, it stated.
During the check, a Maruti gypsy without number was stopped and on checking, 5500 packets of WIN cigarettes, dry betel nuts and other contraband items were found, the release said. It added that three people identified as Thongmang from Old Samtal, Tong Min Thang from Hengshi and Hai Milien from S Bongjoi were apprehended.