The forest minister stressed that awareness needs to be raised among the people and failure to act immediately may lead to extinction of many animals and birds species. 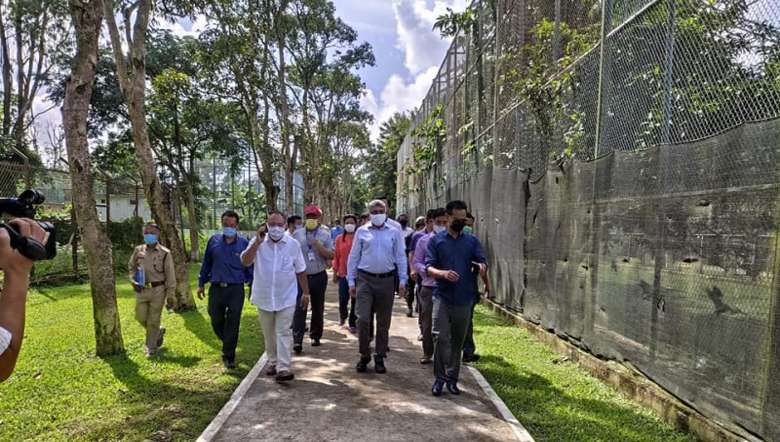 Manipur Minister of Forest, Environment and Climate Change Awangbow Newmai has stressed on the importance of respecting animals’ rights for peaceful co-existence between humans and animals.

He was speaking at the 44th foundation day celebration of Manipur Zoological Garden at Iroisemba on Friday organised by the Wildlife Wing of the forest department.

Remembering the Father of the Nation, he said that Mahatma Gandhi taught the world that one must practice non-violence, love and compassion for each other by respecting the sentiments and rights of others including other living creatures.

“While human beings have higher and greater reasoning power compared to other animals, humans have forgotten to respect the rights of other creatures, which resulted in nature turning against us in form of various natural calamities, increase in number of diseases and pandemics,” he stated.

It is the duty of human beings to respect trees, plants, animals and insects as every living creatures including plants as they all play a vital role in keeping the earth fit for everyone to live in, he added.

Awangbow maintained that the forest department is continuously raising awareness among the people about the importance of afforestation and animals.

Endangered species, which are on the verge of extinction, are being helped for breeding by the department officials at the Manipur Zoological Garden to increase their population, he said.

The forest minister stressed that awareness needs to be raised among the people and failure to act immediately may lead to extinction of many animals and birds species.

Lauding the department officials at the Manipur Zoological Garden for their dedication towards their duty, he thanked them for taking care of the animals day and night even during the time of COVID-19 pandemic, when people are scared to even venture out.

He also appreciated the animal feed suppliers for their dedication and concern for the animals.

He stated that every year, first week of October is celebrated as the Wildlife Week throughout the country to renew the commitment to preservation, protection and conservation of the rich wildlife and biodiversity.

Joshi maintained that Manipur Zoological Garden is categorised as medium zoo by the Central Zoo Authority and is home to a number of rare and endangered species which are endemic to the region.

“Many of them are included in the Schedule I and Schedule II of the Wildlife (Protection) Act, 1972 and include Sangai, Nongin, Hoolock Gibbon, Clouded Leopard, Leopard Cat, Griffon Vulture and Reticulated Python among others,” he added.

Ahead of the function, to mark the occasion of the foundation day of the Manipur Zoological Garden and Gandhi Jayanti, dignitaries cleaned the campus and planted saplings of fruit bearing trees.

During the function, staff, attendants and suppliers of animal feed were also given prizes acknowledging their contribution and exemplary dedication during the COVID-19 pandemic.