'‘None of the alphabets or words in the monolith can be changed". 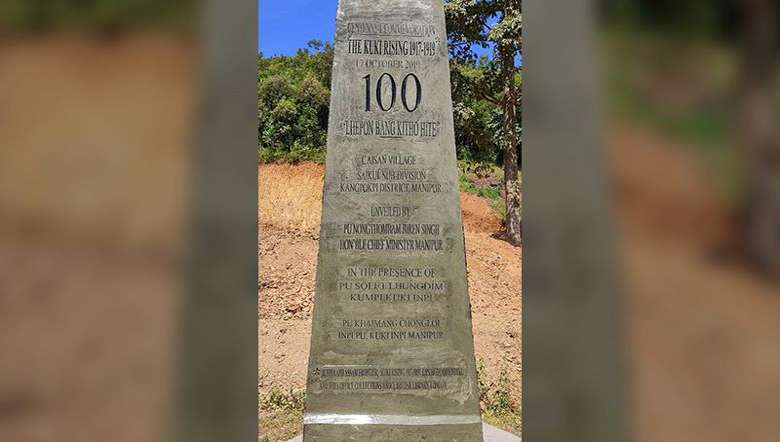 A year after the Centenary celebration of the Anglo-Kuki War 1917-1919 at C Aisan Village in Kangpokpi district of Manipur, Chief Minister N Biren Singh reportedly inaugurated the monolith via video conference on Saturday with changes in some of the inscription on the monolith. The Kuki National Assembly (KNA), however, said that the Centenary celebration of the Anglo-Kuki War 1917-1919 was over and the chief minister's inauguration programme of the same is 365 days late.

The KNA also said that demolition of the already inaugurated and dedicated monolith, any change of words inscripted in it and re-inscripting and the re-inauguration ceremony via video conference cannot be accepted by the Kuki National Assembly and its people, the Kukis.

The Kuki National Assembly (KNA) is a pan-political organisation of the Kukis which was formed with the objectives of protection and promotion of the Kuki political interests, preservation of their culture and heritage, achievement of fraternity and unity among them.

KNA president Mangboi Haokip said,"We have no knowledge about the demolition of the already inaugurated and dedicated Anglo-Kuki War Centenary celebration and erasing some of the inscripted words such as 'Ancestral Land and Freedom' and 'Anglo-Kuki War' with new words...For the people of the Kukis, the Centenary celebration was over and what is written in the monolith is written. Changes after it is not known and accepted by the Kukis and it has no meaning at all for the Kukis as we have no such resolution to changes and re-inscript or re-inaugurate the monolith”.

Haokip also said, "Our ancestors fought the mighty British not in foreign land but legitimately in our land which is why the words ‘Our Ancestral and Freedom’ inscripted in the monolith cannot be changed while pointing out that the words ‘Anglo-Kuki War’ cannot be replaced by the words ‘Kuki Rebellion’ as it is an illustrative words depicting who fought whom. Which is why it was clearly inscripted in the monolith as Anglo-Kuki War to depict the lengthy war between the Englishmen and the Kukis for three long year in defence of our ancestral land and freedom".

"None of the alphabets or words inscripted in the monolith can be changed as it is not a matter of addition or subtraction but a genuine and legitimate record," he added and appealed that any individual or community who opposed the use of all these words to change their misinterpretation.

Meanwhile, in his letter to the state chief minister, Haokip stated that it is lawful to remember our ancestors who fought the invading British force and sacrificed their lives by writing, ‘in defense of our ancestral land and freedom’ in the monolith as they actually fought to defend our land while adding that if you considered ‘hingminnasi’ in true sense please respect the sacrifice made by our ancestors in defending our land from the mighty British".

Haokip also stated that the Anglo-Kuki War took place after 28 years from the downfall of the Kingdom of Manipur in the Anglo-Manipur War or Khongjom War 1981 and historical events cannot be changed while it is not possible to ignore what happened.

"In 1946, when the King of Manipur Bodhchandra Singh signed the Merger Agreement, he got the pension privileged and compensation from the Government of India same as other princely state. But the Kuki chief did not sign with the Indian Government and also never availed the pension or compensation from it. This is the testimonial truth which the world is to recognize our sovereignty," he added.

He further stated that at any cost the Kukis try to maintain cordial relationships with our Meetei brethren but our patience is running out owing to the indifferent attitude and divide and rule policy of the Meetei chief minister.

He continued that annexation of tribal territories to the valley district on the pretext of Administrative convenience and police boundaries or development was properly recorded by the International Human Rights Association (IHRA).

"All these events compelled us to decide our future by having a separate political Administration to safeguard our land and it’s people rights," he said, adding, "I am always ready to give you fitting response if circumstances invite in regards to Kuki territorial issue and history".