PMJAY cards yet to reach many areas in Manipur, says MP Ranjan

“In a recent survey, we have found that 85.9 per cent people are deprived of medical facilities where 24 per cent sell their properties to fulfil their medicinal needs," the MP said. 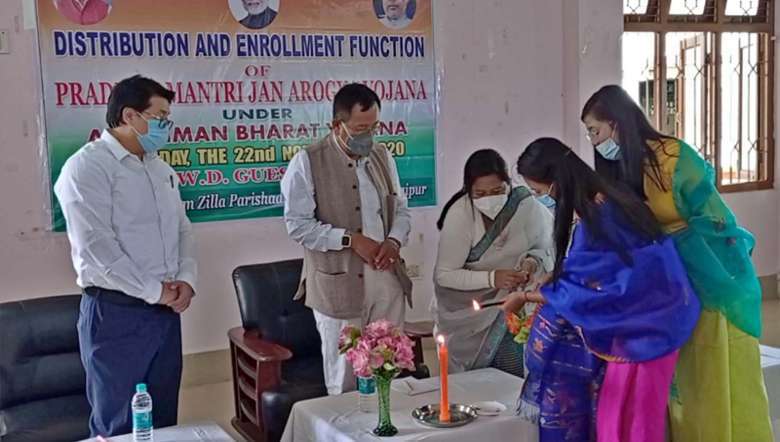 The Pradhan Mantri Jan Arogya Yojana (PMJAY) was launched to help needy people access medical treatments in hospitals, but the PMJAY cards are yet to reach many areas in Manipur, said Member of Parliament RK Ranjan Singh on Sunday.

“In a recent survey, we have found that 85.9 per cent people are deprived of medical facilities where 24 per cent sell their properties to fulfil their medicinal needs. So, the PM has undertaken the steps for PMJAY's card distribution to solve this problem,” the MP said.

The MP was speaking as function chief guest at the distribution and enrolment function of the PMJAY under the Ayushman Bharat Yojana in Jiribam.

Malemnganba said Ranjan has helped them in many areas and whenever Jiribam district needed him. “He showed great enthusiasm in distributing the PMJAY cards, for which we are very thankful to him. The COVID-19 situation in Jiribam is under control. So, all residents of Jiribam are requested to maintain safety measures,” he added.

Janaki Devi said all the needy people of Jiribam will receive their PMJAY card as early as possible. Later, the cards were distributed among some residents of Islamabad, Jairolpokpi, Kalinagar and Babupara areas, by MP, DC and Adhyaksha.

Hillghat GP Pradhan thanked MP, DC, and all others for their huge support in fulfilling the needs of Jiribam and particularly for the distribution of the PMJAY cards.