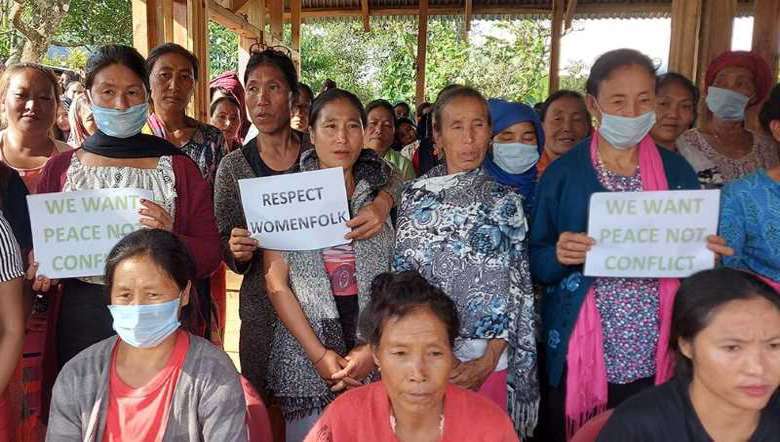 A violent confrontation took place between the womenfolk of Namrei village in Ukhrul district of Manipur and the personnel of 27 Assam Rifles who allegedly apprehended three NSCN (I-M) cadres from the village early Friday morning. In the heat of the confrontation, an AR official admitted to "slapping" one of the women protesters and later apologised to her as told to the Imphal Free Press correspondent

The incident happened in Namrei village in the wee hours on September 11. Following a tip-off on the presence of NSCN-IM cadres in the village, the 27 Assam Rifles personnel reportedly raided a house at the village and allegedly apprehended three of its cadres. On learning the news, womenfolk in the village came out in large numbers to protest against the alleged act of Assam Rifles. The protest took an ugly turn when the CO of 27 AR allegedly slapped the secretary of Namrei Shanao Long (Women's group of Namrei), Sothingla Shatsang.

Following the violent incident, Namrei Shanao Long chairperson Florence Ramrar informed this IFP correspondent about the "intrusion of Assam Rifles" in the village at around 4:30 am.

"On reaching the spot, we saw three men being handcuffed and were about to be taken away. We protested and appealed to the Assam Rifles to release the three cadres of NSCN (I-M) who had taken rest in our village. We requested them to uncuff them but on their refusal, we tried to break the iron handcuff with a saw. Thereafter, they unlocked the handcuffs and we took away the three unarmed cadres of NSCN (I-M) to safety.

“On learning that the Assam Rifles had confiscated the mobile phones of the cadres, the womenfolk insisted to return the phones too. The army tried to run away with the mobile phones and in the commotion, the CO slapped our secretary,” she alleged.

As the confrontation became worse, the womenfolk sought the help of neighbouring villagers to chase the AR men away from the village.

“Since the locals of the village are few in numbers, they called up neighbouring villagers for help and they responded positively and we chased the Assam Rifles back to where they are stationed,” Florence said, adding they got immediate support from the neighbouring villagers from Razai Khunou, Razai Khullen and Marangphung, who came in large numbers.

When asked, Sothingla Shatsang narrated the incident to the IFP correspondent.

“The CO of Assam Rifles was surrounded by the AR personnel. They tried to run away with the phones. I asked for the phones to be returned, but instead the CO gave me a tight slap on my right cheek. But that did not deter us and one AR cadre even threatened me by pointing his gun at me. I hit the gun with the stick I was holding. They tried to run away, but the women folk way laid them. Though the CO was surrounded by the AR personnel, I entered the circle forcefully and wrapped a blue colour kashan (sarong) around his waist. The sarong was immediately removed by one of the AR personnel. The AR Officer applogised and told me that if I was was angry for the slap, I could slap him. So I did".

Sothingla added that she had come back from Chennai because of the COVID-19 pandemic and was elected recently as the secretary of Namrei Shanao Long.

The CO of 27 Assam Rifles while interacting with this IFPcorrespondent stated, “I do accept that I am completely responsible for the incident that happened today at Namrei village. However, I would also like to submit that the situation was very chaotic and the Namrei women were excessively violent today. Being a woman does not provide immunity to prevent a government servant from performing his duties. She was trying to snatch my mobile phone thinking that it belonged to the NSCN (I-M) cadres and eventually, I slapped her during the scuffle.”

Later, the three mobile phones were handed over to the chairperson of Namrei Shanao Long and the Assam Rifles took signatures of the three NSCN (I-M) cadres and the headman of the village on a blank paper. One SBBL gun was also taken away by the Assam Rifles, the villagers said.

The womenfolk said that the village community has been taking all precaution to safeguard the village during the COVID-19 pandemic.

“During this time of pandemic, the community is taking all possible precautions, and in case of any visit from outside, it is mandatory to give prior information and get permission from the village authority. So far there is no COVID-19 positive case in Namrei and in case of any eventuality, the Assam Rifles will be held responsible,” stated the chairperson of Namrei Shanao Long.

Chairman of Ato Longphang, Dearson Chamroy lauded the Namrei women folks for their courageous act and neighbouring villages for their immediate response. He stated that the SBBL gun should be immediately returned to the licence owner. The act of raiding by Assam Rifles when the peace talk is going on and especially during COVID-19 pandemic time is extremely unfortunate, he added.

Tangkhul Shanao Long president Veronica Zingkhai stated that TSL will not forgive and leave alone the officer who laid hands on the member of TSL. The matter will be dealt accordingly as per Tangkhul Customary Law, she added.
As a mark of protest of the incident, the womenfolk also held placards that read “We want peace not conflict”, “Respect Womenfolk”, “We condemn AR’s Excessive Acts” and “Honour Ceasefire Agreement”.

Tangkhul Naga Long president Hopingson A Shimray informed this IFP correspondent that a joint meeting of all Tangkhul CVOs will be held at TNL office on September 12 at 12 noon to deliberate further course of action.