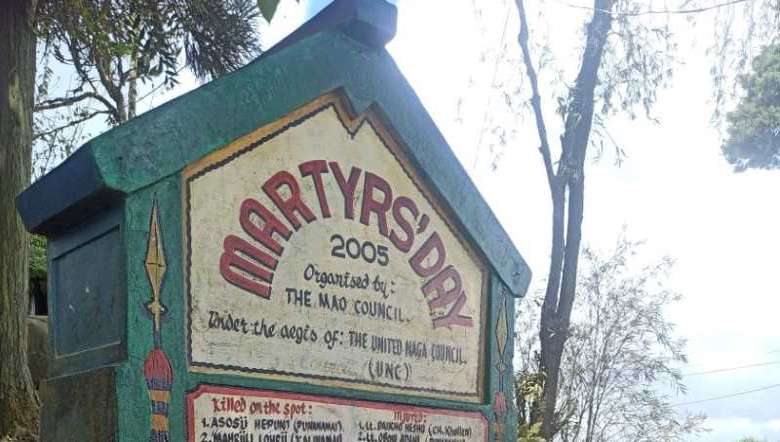 Remembering the supreme sacrifices made by the patriots of 1948,The Mao Council under the aegis of the United Naga Council (UNC), observed the 72nd ‘Martyrs' Day’ at Song Song Youth Club Hall, Mao on Thursday.

The three patriots were martyred while supporting the Naga movement for self-determination based on the history of political rights of the Nagas.

President of Mao Council, S Daiho stated that the aspirations of the Nagas could be fulfilled through their sacrifices. The cause withstood by the three patriots would remain indelible in the annals of forging the Naga legitimate rights, distinctive identity and self-determination, he added.

Bringing the solidarity messages, finance secretary of the United Naga Council (UNC), Athili Kayina while paying tribute to the martyrs, said that people were gathered to regain their consciousness of the event that took place on this day some 71 years ago, he added.

“The presence of the nation stands on the foundation that has been laid on the lives of the freedom fighters. These martyrs sacrificed their lives to ensure that the future generations get freedom from chains of slavery, subjugation and exploitation,” said Athili.

President, All Naga Students Association, Manipur (ANSAM), Joseph Adani, said the struggle of Naga people for self-determination has been a long journey that has claimed thousands of precious lives and uncountable sacrifices.

He mentioned that most of such sacrifices went unnoticed yet some of them found their way in the history books and are even remembered till this day with great pride and honour as the people continue their struggle to achieve their common hopes and dreams.

The historic day of August 27 brings an immense sense of patriotism to all the Nagas especially those in the southern part which emerged to be pioneering the political movement for freedom. He said the day was also observed as ‘Naga Unification Day’ in 2006 by the UNC and the Naga Hoho, said Joseph.

President, Naga Women's Union (NWU), Asha Wungnam in her solidarity message while paying respect and honour to the martyrs, said that it is a landmark in the history of political movement of the Nagas in Manipur.

The women leader stated that the Naga National League (NNL) had their strong desire to merge with the Naga Hills District of Assam through ‘Boycott’ for preparation of electoral roll in Naga areas. The Nagas in Manipur boycotted the election and thereafter launched the ‘No Tax Campaign’ which was spearheaded by A Daiho of Mao and N Modoli, of Poumai as the president and secretary respectively of the NNL, she added.

According to the UNC paper, the Manipur Maharaja, Budha Chandra was on good terms with Sir Akbar Hydari, the then governor of Assam, who was requested by the Maharaja to send a contingent of Assam Rifles to arrest A Daiho.

"Sir Akbar Hydari, well known for his anti Naga political stand, gladly approved and dispatched a contingent of 4th Assam Rifles along with State Police equipped with rifles and machine guns, to Mao Gate on August 27, 1948. The Assam Rifles took position in and around Mao Inspection Bungalow in war like fashion and indiscriminately fired at the volunteers/ students of the Mao-Maram Tribal Council (now Mao, Maram, Poumai, Thangal and Upper Zeliang) who were blocking the road leading to the residence of A Daiho,” the UNC paper added.