The person who is giving asylum to Molecule should be given equal punishment along with him under section 34 of Indian Penal Court, said advocate Sanoubam Shyamcharan who is also the advisor of ‘JAC against brutal killing of Gurumayum Suraj Kumar Sharma’. 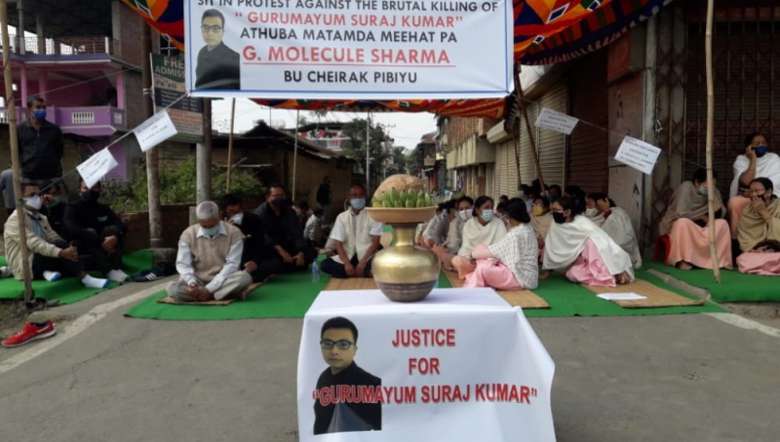 Sit-in-protests were staged at two different places on Sunday, demanding to book Gurumayum Birchandra Sharma alias Molecule for allegedly killing his nephew with a licensed gun.

The person who is giving asylum to Molecule should be given equal punishment along with him under section 34 of Indian Penal Court, said advocate Sanoubam Shyamcharan who is also the advisor of ‘JAC against brutal killing of Gurumayum Suraj Kumar Sharma’.

He was speaking to the media during the sit-in-protest staged by the locals of the victim at Chingamathak Ngakraba Leirak, Imphal West.
Recalling the resolution taken by the JAC on Saturday, he said Molecule should be arrested within 48 hours. The incident occurred at about 10 am on Saturday but the alleged killer is still on the run, he said adding that those who may be giving asylum to Molecule should be given equal punishment.

He appealed to the state Home department and state police to book Molecule within the given deadline so that the last rites of deceased Suraj Kumar can be carried out.

After Suraj Kumar succumbed to bullet injury at Raj Medicity hospital, his body has been kept at RIMS morgue. Molecule reportedly fled from the spot immediately after allegedly shooting Suraj Kumar with his license gun. He reportedly escaped in his Maruti van ambulance (white in colour) bearing registration number MN05 A6135.

Speaking to the media, a protestor said that the accused person in the killing of Suraj Kumar should be booked immediately.

The association strongly condemned the killing of Suraj Kumar, he said. “The state government needs to monitor the issuing of gun licenses to people. A proper check up for mental health and background should be conducted before issuing a gun license to someone. The government should take the incident seriously and Molecule should be given proper legal punishment,” he said.

The protestors staged the demonstration with placards that read ‘no to gun culture’, ‘justice delayed is justice denied’, ‘license to gun, not license to kill’, ‘justice for Gurumayum Suraj Kumar’ among others.