Misuse of MGNREGS, wage deduction of job-card holders have become tradition in Manipur

Many job-card holders complaint of no works during the pandemic even after the Union Rural Development Ministry directed the state to focus on giving work under MGNREGS to ensure that the lockdown should not impact the livelihood of rural areas. 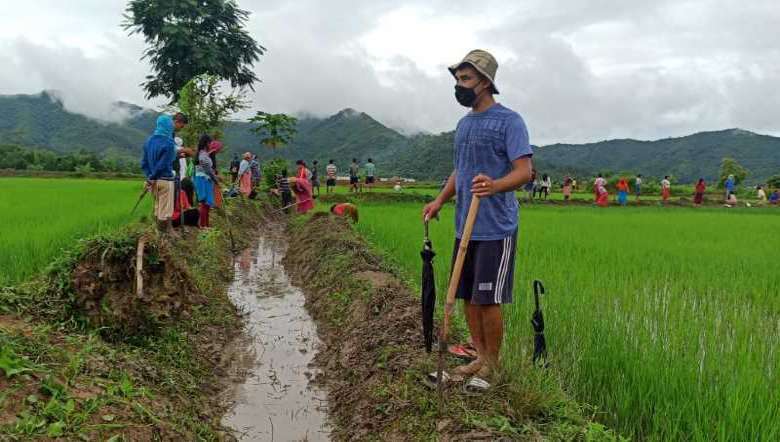 The Mahatma Gandhi National Rural Employment Guarantee Scheme (MGNREGS) for statutory support to the right to work for poor people in rural areas of Manipur has become a scheme of open corruption.

“We know the elected candidate has spent lots of money during the election. We will be very happy if the elected member and pradhan deduct our daily wages in a smaller amount,” said a job-card holder Thiyam (O) Langlen from Imphal East district.

She said it is true that every job-card holder has their own bank accounts and MGNREGS daily wages are directly transferred to the account but the members of the ward have become collectors who come to the house to collect Rs 400 from each job-card holder.

Another job-card holder from Imphal East, Chongtham Abesana said that this year the government has announced 100 days of work. In a month, six days have been announced for work but members and pradhan have asked the workers to work for four days only, which means the remaining two days wages are for them. Members of the ward often come to collect the money after the wages have been transferred to the accounts of the MGNREGS workers, she added.

Interestingly, while this IFP reporter visited Tulihal and Poraikhongjil areas of Imphal East district, many job-card holders complaint of no works during the pandemic even after the Union Rural Development Ministry directed the state to focus on giving work under MGNREGS to ensure that the lockdown should not impact the livelihood of rural areas.

However, Konjengbam Latashori, a job-card holder of Poreikhongjil said that it is very hard to earn money during the pandemic as she has stopped selling vegetables at Kongba market.

“I heard that this year daily wages have increased for job-card holders. After deducting some amount for pradhan and members, I hoped I would be able to get Rs 800 or 700 for a month. However, I cannot say anything as of now as pradhan, member and zilla parishad have not announced any work since March of this year,” said Latashori.

The state panchayat and rural development department has started working under MGNREGS for providing assistance to the economically and socially vulnerable section of people in rural areas to compensate for daily wages but some gram panchayats of Imphal East have not been working.

Concerning the situation, this reporter contacted Pradhan of Tulihal gram panchayat, Khalique and he said that the work of job-card holders is delayed this year as the work demand has not been sent before. The work will start by November, he added.

While visiting Haraorou, Tangkham, Sambai Gram Panchayat of Imphal East, this reporter found that the maintenance allowance has not been used, instead members, pradhan or zilla parishad have asked the workers to bring their own instrument or equipment to use for the work. Also, there are no first aid kits at the workplace.

It is also revealed that deduction of daily wages is created as custom in a way agreed between job-card holders and elected gram panchayat leaders. By political influence, some people who are in favour of the elected members or pradhan or zilla parishad always ask to contribute some amount of money from the job card holders. And if the 15 days’ work per month is completed in four days or six days then those remaining work wages have to be given to the members or pradhan or zilla parishad.

Open corruption is widespread in the state against MGNREGS rules and regulation and the same situation was raised in Imphal West, Thoubal and Kakching.

“Zilla Parishad has intentionally taken four days to clean the community pond. Cleaning a large pond by 200 job card holders will not take four days. Such type of digging up mud from a pond should be done with a machine and there is no work to do for four days,” said Tekcham Thoibee, a job-card holder from Imphal West.

Further, it is found that in Thoubal district some pradhan members and zilla parishad are misusing the fund by engaging some people who are unaware about MGNREGS and bank people. To earn money through fake job card holders, fake accounts were opened and shared among them.

According to rural development and panchayati raj report of 2019-20, average days of employment provided per household have been decreasing significantly from 62 days in 2012-13 through 24 days in 2013-14, to only 15 days in 2014-15 but now it has increased to 100 days in a year. Both male and female engage almost equally in the works.

A large scale misappropriation of funds by implementing agencies was also raised and appears that crores of money has been siphoned off by the vested interest with the connivance of the officials.

In 2010, a project called ‘Land Development’ at Liberal College Luwangsangbam was approved by deputy commissioner, coordinator of NREGS, Imphal East district for execution. A total of Rs 11 lakhs was sanctioned and released through zilla parishad of Imphal East. But the said amount has been misappropriated by implementing agency without doing any work. Principal of Liberal college lodged a complaint to the deputy commissioner of Imphal East. Further, chairman of the governing body of Liberal college also lodged FIR for investigation to the SP of Imphal East in 2011. But till today, no FIR case has been registered and no investigation is taken up.

Another case is about Rs 17,16,707 that was released for construction of IVR with side drain, culverts and shingling from Awang Potsangbam Khunou via Keklon to Nilakuthi. Interestingly, the said IVR is a PWD road. The maintenance and construction were done by PWD. But the work has been executed on papers and all amounts released under the work have been misappropriated.

The issues of misuse of funds under the scheme have been reached to the High Court of Manipur since 2018. Three persons namely, Meinam Sidique, Md Oli and Md Wahid Khan from Thoubal district had filed public interest litigation (PIL) before the High Court by alleging the authorities concerned that the job-cards and the bank passbooks are not handed over to the concerned beneficiaries.  Further, it was also alleged that the authorities had misused the fund of the schemes.

Accordingly, the High Court of Manipur after proceedings had directed the chief secretary of RD and PR commissioner to take action to ensure that misappropriation of the funds granted under the Mahatma Gandhi National Rural Employment Guarantee scheme is not siphoned off. The High Court had also directed them to hold a meeting to find out loopholes that may lead to the misappropriation and fraud, and the officials who are found to have misappropriated the funds in any manner be proceeded with as per law.

Further, the same PIL petitioner of 2018 again filed writ petition PIL in 2020 for the lack of positive action from the authority’s side.

During the High Court proceeding, the court has called for a relevant enquiry report from SP (Vigilance). According to SP (Vigilance) enquiry report in respect to 28 beneficiaries of Maibam Uchiwa, Thoubal district recommended for a prima facie case commission of offences of cheating, criminal misconduct and criminal conspiracy on the part of the officials of directorate of rural development and panchayati raj, elected members, business correspondents and private persons. However, the High Court of Manipur after proceedings of writ petition 2020 has directed SP (Vigilance) to constitute SIT to investigate the misuse of MGNREGS. SP Vigilance has been directed for a thorough investigation to find out irregularities committed during the implementation of MGNREGS in all districts by constituting a Special Investigation Team (SIT) and take necessary steps for booking and punishing all culprits involved.

Transparency and honesty among the implementing officials, Panchayati officials and other stakeholders must be improved and awareness about the schemes to the general public is a highly essential for well implementation of the scheme.