The state’s oldest highway, Imphal-Tamenglong road serves as the only lifeline of more than 30,000 people residing in the area which is now totally cut off. 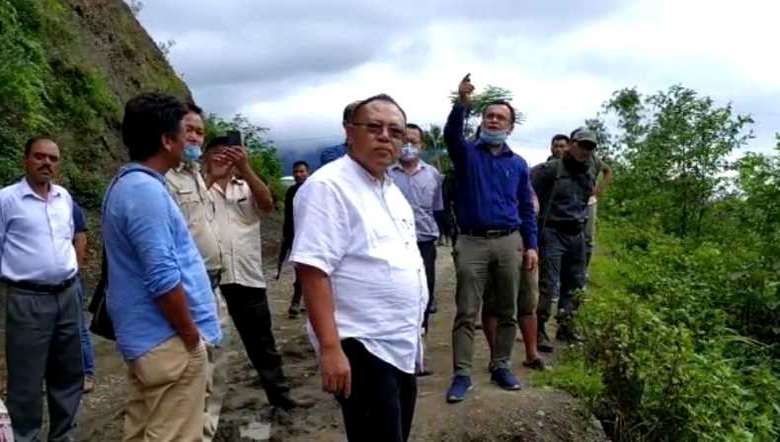 Manipur Minister Awangbou Newmai on Thursday visited Manipur's oldest highway, Imphal-Tamenglong road, commonly known as IT Road or Twilang road in an effort to address the plight of the people living in the area that has been totally cut off by q heavy landslide between Poudel Basti and Thonglang Atongba village since July 6.

The forest, environment and climate change and sericulture minister was accompanied by additional chief engineer and other officials of the Public Works department apart from SDO T Waichong and additional SP(Ops), Kangpokpi.

A massive landslide that occurred on July 6 along the Imphal-Tamenglong road had swept away around 40 meter of the road near Thonglang Atongba village and cut off the area from the rest of the world, rendering immense hardships to the people.

It had also affected more than 150 metres of the road and its surrounding area, causing fissure and earth crack inside few residential houses at Thonglang Atongba, rendering them in dilemma while damaging around 10 residential houses of the village.

The state’s oldest highway, Imphal-Tamenglong road serves as the only lifeline of more than 30,000 people residing in the area which is now totally cut off.

The Joint Monitoring and Development Committee on IT Road Kangpokpi to Tamei had drawn immediate attention of the concerned authorities and the state government but it remained unattended till today, alleged the committee.

On the sidelines of the inspection, Newmai said that it is an annual problems of the people residing along Imphal-Tamenglong road on every monsoon season and it's time a permanent solution is established to address the public plight.

He assured that technical process and political pressure to restore the road shall be initiated within two-three days and he will try his best to begin the work of alternative connectivity or restoration of the road swept away by the landslide.

However, the minister said that it should be a collective effort and urged the people to cooperate and help the government in their capacity to restore the road. He also appreciated the commitment of the Joint Monitoring and Development Committee on IT Road Kangpokpi to Tamei, SDO T Waichong and additional SP (Ops) Kangpokpi and exhorted them to continue in helping the government restore the road.

Meanwhile, chairman Joint Monitoring and Development Committee on IT Road Kangpokpi to Tamei Lutngam Manlun expressed gratitude to the minister on behalf of the people for his keenness and concern towards solving their plights and assured to help in restoring the road.