Sadananda Leisangthem, the 6th position holder in the HSLC 2020, was awarded the Thoubal District topper award. 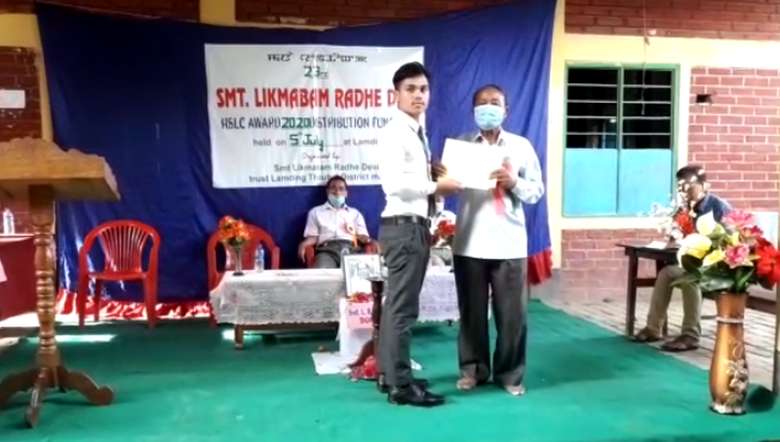 The first toppers amongst the students from the schools in Thoubal district were felicitated at the 23rd Srimati Likmabam Radhe Devi HSLC Award Distribution function 2020 which was held  at the auditorium of Progressive English School Lamding, Thoubal.

The function, organised by L Radhe Devi Trust, Lamding, Thoubal district had the president of the Trust B Nabakishwor Sharma, executive members of the trust Nahakpam Biren and Ngangom Nitaichand as presidium members.

These three toppers were all the students of Evergreen Flowers English Scholl, Thoubal Ningombam.

The third Thoubal District award was received by Arambam Romance of Paradise English School Thoubal. He scored 546 marks out of 600.

Member of the trust, Narengbam Robindro while giving his keynote address remembered the sacrificial deeds of Likmabam Radhe who once served as a School Mother. He recollected that the distribution of awards was started in 1997 when Radhe was alive.

Robindro highlighted how the Trust was formed and what was its aim. He advised the toppers to be obedient and maintain discipline always. These are the essential things that make a man perfect, he said, adding that the present deputy commissioner of Thoubal District Nongmaithem Bandana was one among the toppers who were once felicitated by the Trust, he remembered.

Other speakers also remembered the roles taken by Likmabam Radhe while spreading the value of education in the rural areas in the early 70s.

As a part of the event, floral tribute was also offered to the photo of the donor, Likmabam Radhe. The function was held by following the guidelines of SOP.