As many as 368 street vendors have benefitted under the Pradhan Mantri Street Vendor’s Atmanirbhar Nidhi - PM SVANidhi. 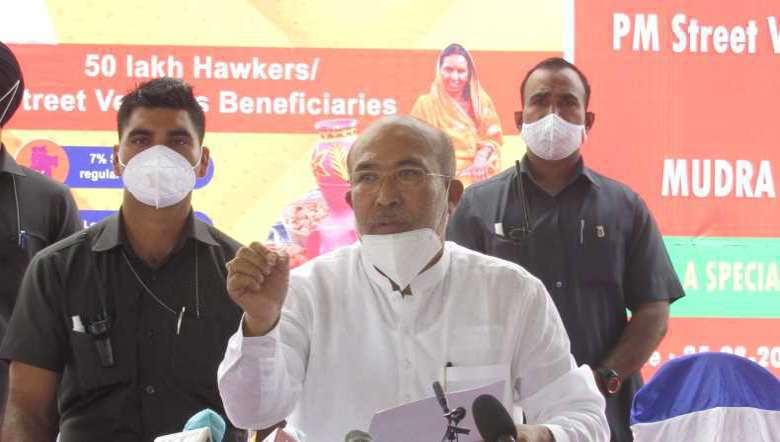 Chief Minister N Biren Singh on Tuesday distributed loans to a total of 817 vendors of different districts in the state to support them in resuming their vending activities which have been affected by the lockdown amid the Coronavirus spread.

Speaking on the occasion, the chief minister said that Manipur is comparatively better in COVID-19 situation when compared with other states. It was due to the timely decision taken by women vendors to close the three Ima Keithels, he observed.

N Biren Singh said that he visited Khwairamband Ima Keithel on March 19, 2020 and discussed with women vendors about the gravity of the situation, upon which they readily agreed to close all the three Ima Keithels from the next day.

The chief minister said the government understands the financial difficulties which the vendors have been facing since the past five months. As such, the government has decided to extend financial help in the form of loans to them under two different Government schemes in consultation with different banks so that they may start their livelihood anew, he added.

Biren further said that loans would be provided to a total of around 20,000 vendors from different parts of the state. He said he had requested the Union Housing and Urban Affairs Ministry to allow utilization of funds from the Ministry in hill district headquarters as well.

PM SVANidhi was launched by Ministry of Housing and Urban Affairs on June 15, 2020. It is a special micro credit scheme for providing affordable working capital loan to street vendors to resume their livelihoods that have been affected due to COVID-19 lockdown. The scheme is valid until March 2022. Under this scheme, the street vendors, who were vending within the limits of an urban local body as on 24th March, 2020, can avail working capital loan of up to 10,000, which is repayable in monthly installments within the tenure of one year.

On timely and early repayment of loan, an Interest subsidy @ 7% per annum will be credited to the bank accounts of beneficiaries through Direct Benefit Transfer (DBT) on quarterly basis. The scheme promotes digital transactions through cash back incentives up to an amount of Rs 7,100 per month. The vendors can avail the facility of escalation of the credit limit on timely / early repayment of loan.