The Irang bailey Bridge near Toubam village, Noney district had collapsed on November 1, causing the death of one person. 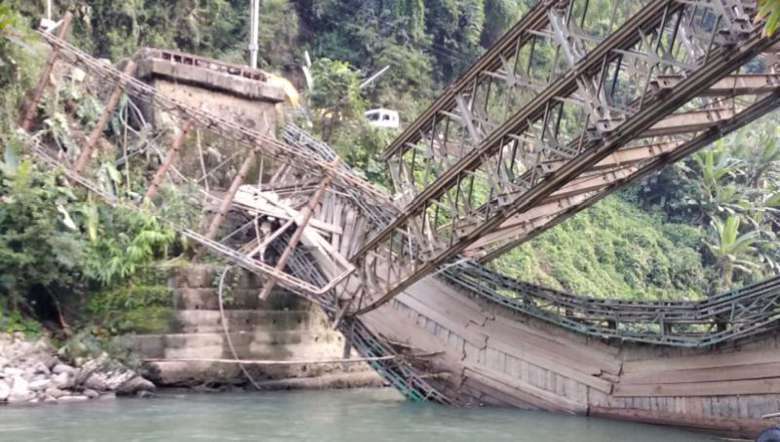 Irang Bridge linking Imphal-Jiribam road along National Highway-37 which reconstruction works was expected to be completed by late Wednesday or Thursday collapsed again on Wednesday reportedly due to technical failure around 11:50 am.

The Irang bailey Bridge near Toubam village, Noney district had collapsed on November 1, causing the death of one person. Due to the failure to link the national highway, loaded trucks with minimum loads divert their route by passing through Khoupum via Bishnupur to reach Imphal.

Repairing work of Irang Bridge started after uninstalling a similar bailey bridge constructed at Tengnoupal along the Imphal-Moreh road. The repairing materials were carried from Bishnupur via Khoupum. Reinstallation of the bridge was carried out by 52-engineer regiment of the Indian Army of Leimakhong and National Highways and Infrastructure Development Corporation Ltd(NHIDCL).

Reinstallation of the bridge was targeted to be completed by Friday but due to technical failure, it collapsed before its completion. The collapsed bridge will be pulled by using heavy machinery to complete reinstallation at the earliest, it is said.

When Imphal Free Press reporter called up one of the area managers of NHIDCL for details, no details could be had at the time of filing this report owing to poor mobile network at the bridge site.

Meanwhile, it has been said that a team of All Manipur Road Transport Drivers and Motor Workers Union led by its general secretary Maimom Anil will leave Imphal to monitor the incident at the construction site.

Meanwhile, the Communist Party of India (CPI), Manipur State Council, appealed to the central government to construct a new RCC bridge on Irang river in place of the collapsed bailey bridge, so as to accommodate heavy loaded trucks plying along the national highway.

Addressing a press conference on Wednesday at the CPI office in Imphal, state secretary of CPI L Sotinkumar said that the state having road connectivity with mainland India with only two highways and illegal taxes taken from the trucks owners, there is consequential meagre flow of essential commodities into the state.

As a result, the plight of above 30 lakhs population of the state knows no bound due to sky-rocketed price hike of essential food items, particularly in the wake of COVID-19 outbreak, he added.

Asserting that the construction of the national highway of the state was assigned to BRO from 1995 till 2005 and then transferred to NHIDCL in 2017, he claimed that no tangible improvement has so far been made till date.

Recalling the promises made by the BJP government of upgrading NH-37 into four-lane with top class maintenance, Sotinkumar said till today the road condition is in “pitiable” condition.

The state secretary also appealed to the central government to speed up the construction works of bridges on Barak river and Makru river and to deploy highway protection forces to prevent from taking illegal taxes.s

He added that the CPI has submitted a memorandum to the Prime Minister to urge upon the state government and ministry concerned to expedite developmental works of the two lifelines of the state for realisation of the assurances accorded to the people of the state.