The framework agreement was signed between the GOI and NSCN (IM) on August 3, 2015. 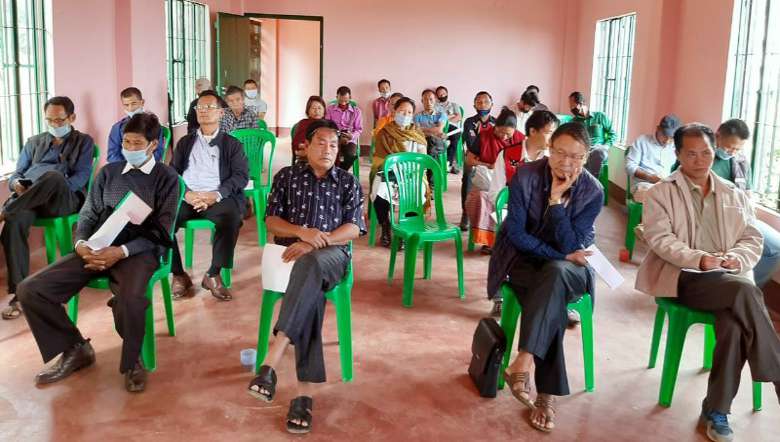 The 5th Anniversary of the Framework Agreement (FA) signed between the Government of India (GOI) and the National Socialist Council of Nagalim (NSCN-IM) was held on Monday at the conference hall of Zeme Naga Council office, Tamenglong.

The observation was jointly organised by four tribe’s councils, including Zeme, Liangmai, Rongmei and Inpui.

A special prayer for Naga political solution was led by pastor of Town Centre Church Tamenglong, Rev. Guiphanang Panmei. A two minutes silent prayer was also observed as a mark of respect and honour to all those who had sacrificed their souls for the cause of Naga nation.

Speaking to the gathering, president of Zeme Naga Council, Manipur, Aku Newmei said that the organising committee could not organise the observance on a larger scale due to COVID-19 lockdown.

“Now is the time for all the Naga people to forgive and forget each other’s mistakes and should keep aside all our political differences, religions, tribalism, factionalism, etc and embrace one another as one family member in Naga nation,” said Aku.

Central administrative officer (CAO) of Zeilad Region, George Golmei in his message said that the Indo-Naga ceasefire was signed between the GOI and the NSCN (IM) which came to effect on August 1, 1997, after the government acknowledged that the conflict which is about six decades old is political in nature.

Golmei further said that after 18 years of tumultuous political dialogues, followed by rounds of formal and informal talks, finally a framework agreement was signed between the GOI and NSCN (IM) on August 3, 2015.

Golmei said that the FA talks about respecting the respective positions and cognizance to the universal principle of democracy, whereby sovereignty lies with the people.

“Today as we observe the 5th Anniversary of the Framework Agreement, the government of India needs to revisit and recollect the emotion and excitement of that very moment. No doubt, valuable years have elapsed without much tangible outcome and all these years are mired manipulation and misinterpretation of the FA which is not a healthy phenomenon,” the CAO stated.

While appealing to all the Nagas to stay firm on the FA, Golmei also said that the agreement is the best deal to have happened as it promises for peaceful coexistence and laid down for the honourable solution.