The two new development projects are for development of natural grass football ground at Mini Stadium Tamenglong and construction of Library-cum-employment information centre. 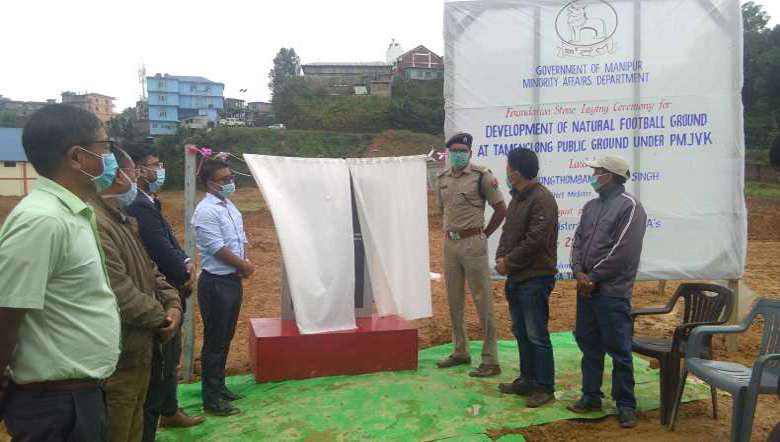 The two new development projects are for development of natural grass football ground at Mini Stadium Tamenglong and construction of Library-cum-employment information centre.

The unfurling of the foundation stone was done by deputy commissioner of Tamenglong Armstrong Pame and superintendent of police Sandip Mohurle on behalf of chief minister N Biren Singh in the presence of SDO Tamenglong Mahesh Chaudhari, SDO Tousem Paul, DRDA project officers Acham Kamei and Kamiuthuan kamei, students and other dignitaries.

Speaking to the media on the sidelines of the occasion, Pame said that the foundation stone for construction of Natural grass football field was laid today which is a long cherished dream of the people of this district.

“In the past, we had seen children conducting parades in this muddy ground. Some of them lost their shoes while some got their uniform torn while conducting march-past. So, with this ground being constructed, we will no longer be experiencing such bad times again. We look forward to having a well laid out ground,” he said.

“The children irrespective of rain or shine will be able to walk on the dry ground in the next parade and also we will have eight running tracks along the ground. With this, we hope the players and sports aspirant of our district will also enjoy the facilities,” Pame said.

He also informed that the project has multi-purpose discipline facilities. A Multi-purpose hall is already being constructed. The floor is going to be repaired for putting up new technology so that this can be utilized for indoor sports like boxing, taekwondo and many others, he said.

He said that under this project, some buildings will be repaired and special arrangements will be made for the player’s room and work will start very soon.

“Along the perimeter of the ground, we are planning to have cycling tracks about 480 metres along the ground and many more coming up within this project,” he said.

“We are progressing quite well. But the bad weather has been one of the disturbing factors and also the pandemic has stopped the work for the last four months. However, we expect to complete at the earliest,” he further said.

He added that this was the commitment given by CM Biren Singh when he came to Tamenglong on November 15 2017.  “He had made a promise to enhance and make one of the finest grounds in the state. Today we are seeing that coming true,” he said.

“We want to thank the state government led by CM, minister of the department concerned for their care for Tamenglong district and also extend a special thanks to the commissioner of Minority Affairs Jacintha Lazarus who had been DC of Tamenglong earlier. She has been working really hard for this project. I am sure with this the people of Tamenglong will see new life,” Pame said.

“We have proposed it and it was accepted. Now we got it sanctioned and we are planning to set it up near United Builder’s School Tamenglong. The land has been donated by Zeliangrong Evangelistic Fellowship Tamenglong (ZEF),” he said.

“We will be setting up a library centre with proper internet connection. We will be serving as an employment information centre where people can download and fill up the online forms for various examinations. They can also come and study there. So, we hope to complete this project very soon,” Pame added.