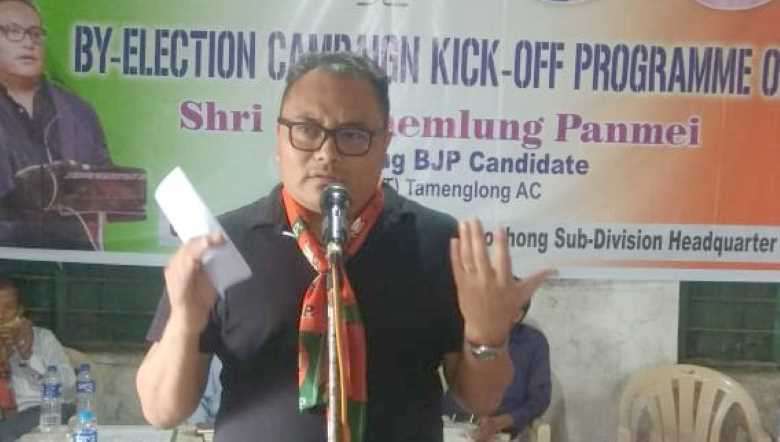 Haochong Village Authority strictly monitored Covid-19 SOP issued by the home department before starting the campaign. The campaign began with a special prayer for the intending BJP candidate by Haochong Baptist Church pastor Bungthoi Inka, at the Haochong Community Hall.

Speaking on the occasion, Panmei said that many development works had been taken up during his tenure as MLA and many more are yet to take up and complete. There are many development works to be taken up under Tamenglong AC, particularly under Haochong sub- division and as such, the by-election campaign was kicked off here today, he said.

“If God is kind enough and people vote for me, I will definitely work harder for the required development work in the Haochong area,” Karopou said. He said after 53- Tamenglong MLA Samuel Jendai resigned from the BJP and as a member of Legislative Assembly, Manipur Chief Minister N Biren called him and made him an active member of the BJP state unit in the presence of the BJP state unit president.

“I did not go and seek a BJP ticket, but Manipur Chief Minister N Biren and the BJP state unit president asked me to contest in the by-election as BJP candidate,” Panmei said.

While giving reports from various villages in the sub-division, leaders from Haochong area expressed their sincere gratitude to Panmei for converting Haochong Sub-Deputy Collector (SDC) into full-fledged Sub- Divisional office though SDO office is not functioning. They urged to make the Sub- Divisional Office function at Haochong sub- Divisional headquarter.

Leaders from Haochong area also pointed out the need to construct Khumji-Kajinglong road connecting five villages in their sub-divisional. They also requested Panmei for Kangchup-Tamenglong road to pass through Haochong Sub-Divisional headquarters.