As many as 97 Soap Caps of Brown Sugar weighing 1.164 kg were found hidden inside eight new blankets in a trunk box 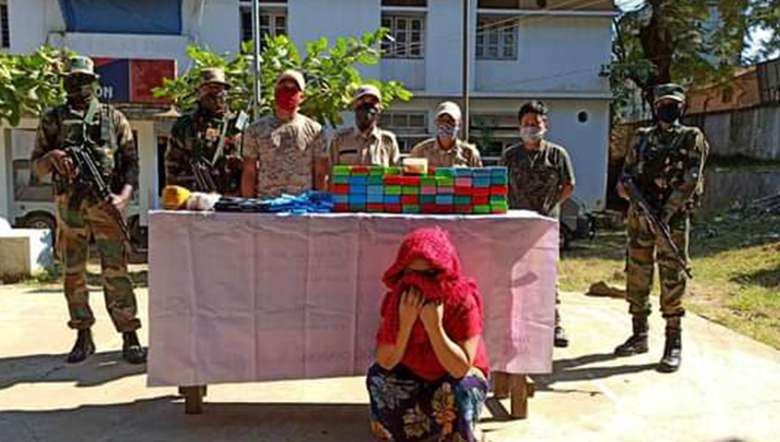 A combined team of 43 Assam Rifles, including Women Assam Rifles, and Moreh Police personnel recovered contraband drugs worth Rs 3.30 crore from a house in Phaicham Veng in Moreh  in Tuesday.

The team also arrested a woman, identified as Sangi Sailo,35 years W/o Ngura Sailo of Moreh Ward No. 3 Phaicham Veng.

According to reports, the security raided a house in Phaicham Veng around 10:00 am following a tipoff.

The women police personnel detained the house owner Sangi Sailo and security force conducted thorough checking of the house.
As many as 97 Soap Caps of Brown Sugar weighing 1.164 kg were found hidden inside eight new blankets in a trunk box. The contraband drugs is estimated to be worth around Rs.2.32 crore in the international market.

On further search of the house, 100 packets of Amphetamine Tablets containing 20,000 pieces of WY tablets were found hidden inside a cupboard  which may worth 1 crore in the International market.proceedings

The Police team arrested Sangi Sailo for possessing Contraband items and a case has been registered at Moreh Police Station for further legal proceedings.