All the awardees were given a memento, citation and cash reward of Rs 5,000 each apart from another Rs 5,000 to the state level position holder and Rs 1,000 each to state level subject toppers. 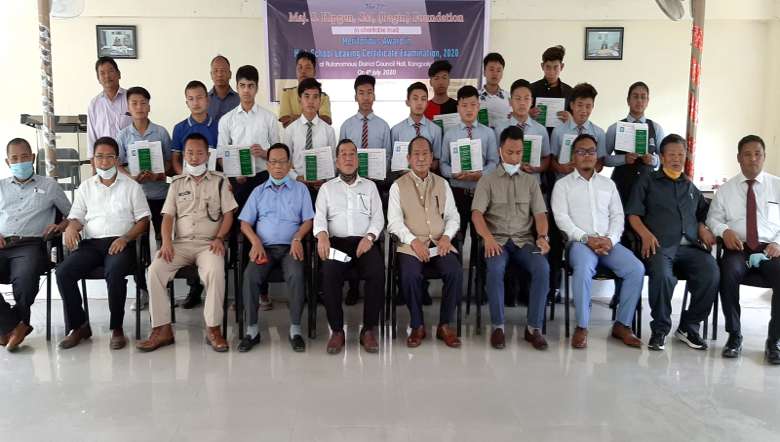 Several meritorious school students of Sadar Hills, Kangpokpi district of Manipur were awarded for their achievements in the recent HSLC examinations. Lauding their success, Major Pagin Kipgen Foundation Charitable Trust (MPKFCT) chairman Thangminlen Kipgen, who is also Manipur NPP president, exhorted the young scholars to dream big and have vision for their lives, saying this is just the beginning.

“In many ways life is like a race and you still have your whole lives ahead of you. So, HSLC examination is just the beginning. It may be the first milestone for your life but I don’t want you to be complacent with what you have achieved in this exam. However, I hope it will inspire you to do even better in the future. This is just the beginning,” Kipgen said in his address to the meritorious students at an award function held on June 3.

The successful students were awarded at a Meritorious Award distribution ceremony. The meritorious award ceremony is organized annually by MPKFCT as a part of its endeavour to bring quality education and to encourage the young learners of Sadar Hills district since 1999. A total of 429 students had already been conferred the award, including this year awardees.

“You must have heard a lot of advice from various sources about what you should do next. But, I just want to encourage you to continue to dream big and have vision, for where there is no vision, people perish. Visualize who you would be or where do you see yourself in 10-15 years and let that inspire you to work hard to fulfill your vision and do not ever forget to ask God to give you a vision, the MPKFCT chairman added.

A brief history of late Maj Pagin Kipgen was highlighted by Dr Ngamkhohao Haokip before declaration of awardees and presentation was conducted by Jampu Kipgen while Rev Paogoulen Sitlhou, M.Th. Pastor and Youth Secretary, TBA(I) offered the blessing prayer for the awardees.

All the awardees were given a memento, citation and cash reward of Rs 5,000 each apart from another Rs 5,000 to the state level position holder and Rs 1,000 each to state level subject toppers. As per record of the MPKFCT, since 1999 the highest pass percentage is secured in the recently declared HSLC examination 2020 with 93.50 pc.

The MPKFCT chairman also motivated the students to continue to see who they are becoming as a person even when others are not watching and continue to be kind, gracious and honest in everything they do as character is just as important as professional or academic success.

“As we know the future of our society, state and the nation is in good hands, we believe in you and become the change agents in our communities, in our state, our nation and even internationally,” he said.

He further said that as a foundation, “we started the charitable trust with an aim to encourage academic excellence in our area and over the years we have seen tremendous progress before adding that if we were to meet you 10-15 years down the line, we hope to see young leaders both men and women, who have achieved much and reached their professional goals”.

Thangminlen Kipgen advised the students to remember three things, first, have vision-spend some time to think about your vision-where do you see yourself in 10-15 years, second, work hard to achieve that vision and third, continue to check who you are becoming as a person – your character is just as important as your professional or academic achievement.

Haokholal Hangshing also motivated the meritorious students and wish them in their future endeavours while Chunglenmang Kipgen also exhorted the students and highlighted some of his experience in his personal life in achieving the MCS.