The water supply schemes under the Jal Jeevan Mission was set up in Khangbarol and Khengjoy of Khengjoy sub division in Chandel, Manipur. 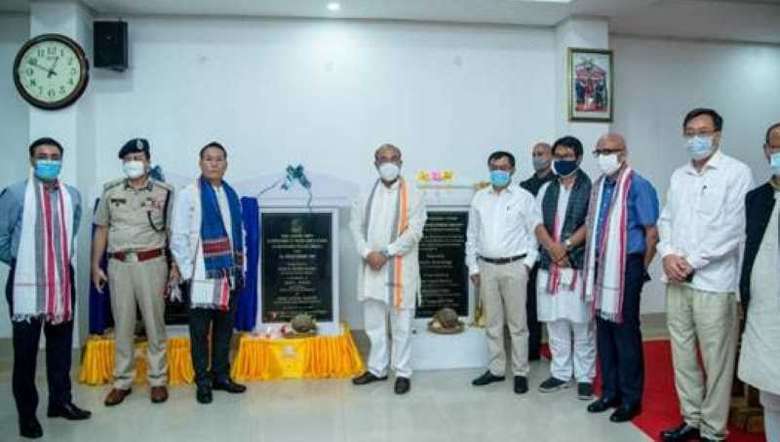 The two villages are Khangbarol and Khengjoy of Khengjoy sub division of Chandel in Manipur, on the Indo-Myanmar border.

Khangbarol is situated 69 km away from district headquarter and lies about 30 km from the Indo Myanmar border. There are 82 households in the village. The water supply system has been designed keeping in mind the projected population of about 1,000 till 2041, the Jal Skahti Ministry said in a release.

With an estimated cost of Rs 60 lakh, this gravity based water supply system ensured tap water connection to all 82 households with present population of about 450. There is a perennial source of water from "Khangbarollok" located at a distance of 6 km away from the treatment site. As the source is located at a higher elevation than the treatment site, gravity based water supply scheme was taken up, the ministry said.

Khengjoy is situated 60 km away from the district headquarter and about 20 km from the Indo-Myanmar border. The ministry stated that the newly inaugurated water supply system caters to the water need of 73 families by providing tap water connection. Now, the operation and maintenance of the scheme is under the Village Water and Sanitation Committee as envisaged under the Jal Jeevan Mission to ensure regular and long-term supply of potable water in rural areas, it said.

The ministry said that accessibility remained the biggest challenge in implementation of the water supply schemes in the hilly areas as the region is inaccessible during the monsoon season. Transportation of material is only possible during a particular time. Also all materials were transported either from Imphal or Pallel town in Chandel district.

A mid-term review of implementation of JJM in Manipur was held recently, wherein Manipur State officials presented the progress to the National Jal Jeevan Mission team. In order to assess the progress of implementation of the mission in States/ UTs, a mid-year review is underway through video conferencing, wherein all States and UTs are presenting the status of tap water connection to rural homes as well as the institutional mechanisms in place for universal coverage.

Manipur has around 4.5 lakh households, but only 30,379 households have tap water connections.

In 2020-21, the state aims to provide 2 lakhs FHTC. During the current year, the state is planning for 100 per cent coverage of 1 district and 15 blocks and 1,275 villages. The state has planned for 100 per cent provision of household tap connections by 2023 under Jal Jeevan Mission.

In 2020-21, the Jal Shakti Ministry stated that an amount of Rs 131.80 crore has been allocated to Manipur, out of which Rs 32.95 crore has been released to the state. The state is eligible for additional allocation based on physical and financial performance. Since Manipur has been allocated ₹ 177 Crore under 15th Finance Commission Grants to PRIs and 50 per cent of it is to be used for water supply and sanitation, the State has to plan for utilizing this fund for rural water supply, grey-water management and most importantly for ensuring long-term operation and maintenance of water supply schemes, the ministry added.