A glimpse into the mystique of ‘Kamikaze’

Kamikaze Offensive has been one of the strangest warfare in history. 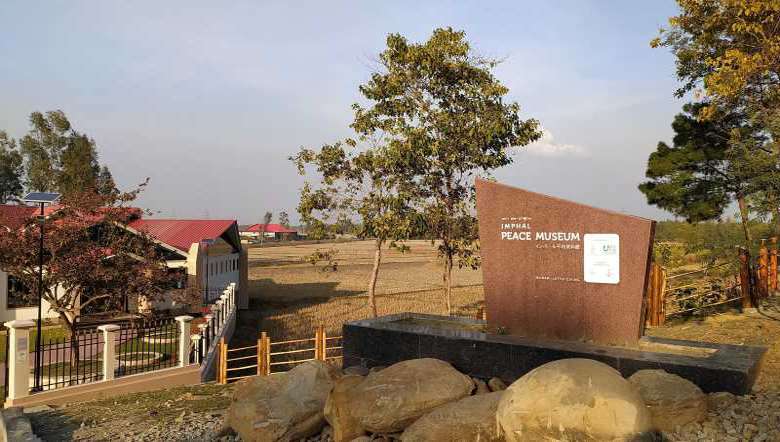 The Empire of Japan entered WW-II on September 27, 1940, by aligning with Germany and Italy.  The USA entered the conflict on December 7, 1941, when Pearl Harbour was attacked. The strategic goals of this offensive were

The beautiful valley of Imphal was engulfed in the crossfire. To the advancing Japanese Army, Imphal was – Takane No Hana  – “Flower on Lofty Heights” later turned ‘Something out of Reach’. British & its allied partners used it as a platform to turn ‘Defeat into Victory’

Battle of Imphal had 1600 young soldiers of CW countries laying down lives; names etched in headstones of Imphal War Cemetery. 70,000 Japanese soldiers died in this theatre.

The Nippon Foundation from Japan has been instrumental in establishing Imphal Peace Museum at ‘Red Hill’ hillock (Maibam Lokpa Ching), as a sign of respect to these sacrifices. The hillock is 853 mtrs high & 331 feet overlooking the road to banks of Loktak Lake, where INA hoisted the Indian Tricolour on 14 Apr 1944. This insignificant hill was the place where the IJA had the last stand before the Tide ebbed. The framed calligraphy of the word Heiwa (Peace) by Prime Minister Abe Shinzo, is a potent reminder of brutalities of War. Equally heady phrase ‘Kami-Kaze’ is associated with the dreamy world of Japanese patriotism & sacrifices. There is something mystical about these ‘Bushidos’, neo Samurais of Nippon.

A book titled Kamikaze: A Japanese Pilot’s Own Spectacular Story of the Famous Suicide Squadrons by Yasuo Kuwahara, Gordon T. Allred, gives a fair insight into mind of a 15 year old pilot, trained, skilled & prepared to ‘Die for the Emperor’.
Since the fateful Sunday 7th Dec 1941 till mid-1944, the see saws of battles between the allied and axis forces continued. In these 30 months none of the four strategic goals of the Japanese Army and Daihon’ei (Imperial General Head Quarters), had been achieved.

The IJN/A had to move 4500 miles of treacherous East & South China Seas & Pacific Ocean. The IJA had to roll through 1900 miles from the Singapore through Malaya & Burmese jungles. The US Pacific fleet had ‘not been crippled’; Juggernaut was forging ahead towards the mainland Japan of Hokkaido, Honshu, Shikoku, Kyushu, Okinawa islands.

Out dated aircraft and loss of experienced pilots brought loss of aerial parity. Japan lost pilots faster than it could train. Japan’s unwillingness to surrender added to effects of combined factors above. As allied forces advanced towards the Japanese home islands, it led to the desperate use of Kamikaze tactics. (Japanese word Kamikaze is translated as “Divine Wind” (Kami means spirit/divinity; Kaze for wind). Origins are of 1274 which refers to a typhoon that dispersed & defeated the mighty Mongol fleet of the “Khan of khans-Kublai Khan”, grandson of Genghis Khan. He had set out with a formidable fleet of 3500 ships & 100,000 warriors to conquer civil war torn Japan).

In August 1944, Domei news agency announced that a flight instructor, Takeo Tagata was training pilots in Taiwan for suicide missions. Captain Motoharu Okamura, of Tateyama Base in Tokyo, was the first officer to officially propose to Admiral Takijiro Ohnishi about kamikaze attack tactics. He had proposed - “In our present situation I firmly believe that the only way to swing the war in our favour is to resort to crash-dive attacks with our planes. There is no other way. There will be more than enough volunteers for this chance to save our country, and I would like to command such an operation. Provide me with 300 planes and I will turn the tide of war”. The desperation of Daihon’ei compelled them to venture into such an attempt to turn the ‘Tide of War’ in their favour. Military leaderships were banking on unquestioned ‘Loyalty’ for such an unthinkable & audacious military plan, where pilots would be ordered to take flight in their single-engine land-based tactical fighter. Aircrafts were named Hayabusa which meant “peregrine falcon” a bird that often serves as a metaphor for speed due to its vertical hunting dive, or stoop, with speed of 290 to 325 km/h, the fastest of any bird. During 1944–1945 Tokubetsu Kõgekitai (abbreviated to tokkõtai ) “Special Attack Units’ consisted of pilots who were initiated for suicide attacks for the Empire against Allied naval vessels. They were designed to destroy warships more effectively than possible with conventional air attacks.

In 3rd quarter 1944, Imperial Japanese Army, zeroed onto probable ‘Volunteer’ Boys who were handpicked from schools. They were in various stages of ‘mesmerisation’ with Japanese decree of Loyalty unto the Empire. These boys of 14/15 years were put through extremely rigorous ‘Basic Training’. During these 3-6 months, the boys who merely reached puberty were ‘broken in’. They were put through a regime of nightmarish days and nights. “Future Kamikaze demanded extreme perfection”. Irrespective of how flawlessly these boys completed each task, the dreadful ‘Hancho’ (head of the Squad) would find the invisible speck of dirt in the dustless floor. Punishment was an integral part of the basic education. They claimed it created unwavering discipline and developed an invincible fighting spirit.  The curriculum including lessons on acquiring necessary skills & lessons for survivals is undoubtedly essential for such demanding responsibilities and tasks. But the methods of extreme brutality used, are beyond the understanding of even a military man, who probably undergoes similar trainings in Military Academies.  (Excruciating details are described in the book “Kamikaze: A Japanese Pilot’s Own Spectacular Story of the Famous Suicide Squadrons” by Yasuo Kuwahara & Gordon T. Allred). Wooden ball bats were used lavishly as the basic tools of teaching aids, by the ‘Hancho’ & ‘Shuban Kashikan’, something rational minds fail to comprehend.

“The future Bushido was told they must learn to follow instructions implicitly, instantaneously & without faltering. The minds were ingrained not to worry about the reasons for any instruction, no matter how strange it may seem. ‘All instructions were given because they were correct. Do you grasp my meaning?’ – was the summing up ritual of the Hancho. Young voices would yell out “Yes, honourable Hancho dono”

Kamikaze Offensive has been one of the strangest warfare in history. The young pilots are convinced that the Pilot is the Samurai; His aircraft the sword, ultimately becoming his soul. Such extreme form of training, mixed with nationalism and empire and the expendability of the individual produced the best of Kamikaze pilots, who would become the ultimate Samurai. “Imperial Rescript to Soldiers and Sailors.” was issued by the Emperor Meiji in 1882 and was regarded as sacred; every military man had to learn, absorb its complex rules and philosophy as The Grand Way of Heaven and Earth. Each had to be fully convinced with doctrine of individual expendability & acquire unwavering testimony called for in the Imperial Rescript. “One’s duty was indeed weightier than the mountains, that death was lighter than a feather.”

The advance course involved lessons of gunnery, formation flying, and aerial manoeuvres. The most unusual was “suicide practice”. This involved diving from specified heights towards a large oval 20 ft diameter target painted on the airstrip. This used to be the most difficult part of flying classes since it involved psychological aspect - the very idea of practicing to die. It was ingrained into the minds of these young pilots to take it for granted that any pilot with a disabled plane would do his best to die in true samurai tradition provided he couldn’t make it back to home territory. Given such an opportunity, he would dive into an enemy ship or plane, taking as many of his adversaries with him as possible. These pilots and men had to be covenanted with death, in absolute terms. This was the crescendo that was built up by people like Colonel Motoharu Okamura of Tateyama Air Base & Vice-Admiral Takijiro Onishi, Father of the Tokkotai & by the Daihon’ei - that every Japanese fighting man knew these words - “They were expendables. They resolved that honour is heavier than the mountains and death lighter than a feather.”

At 1045 hours on 25 October 1944, the Daihon’ei announced Japanese success in a surprise attack against the enemy task force, including four aircraft carriers, thirty nautical miles northeast of Philippine Islands. It was a young lieutenant Yukio Seki who became the world’s first official human bomb when he led that famed Kamikaze attack on Leyte Bay. When asked by the superiors before kamikaze mission, if he would accept the honour, Lt Seki who had married a short time ago, readily responded – ‘Hai’.  That he was profoundly honoured to be considered worthy. That was the way of the Bushido, of the Kamikaze - The Divine Wind. However, by mid-1944 the Japanese failed to inflict serious damage to the Allies aircrafts and ships. IJNAF had sacrificed 2,525 kamikaze pilots and the IJAAF 1,387. Okinawa saw peak period of kamikaze attacks in April–June 1945. Overall, the kamikazes were unable to turn the tide of the war.

On the fateful day of 6th Aug 1945, at 08:15 hours, the B-29 Super fortress dropped the ‘Little Boy’ on Hiroshima. This was followed by ‘The Fat Man’ at 11:05 hrs on 9th Aug 1945 at Nagasaki. The devastation to human kind and rational for the only time when atomic bombs have been used on mankind still remains haunting. 6 days later Emperor Hirohito gave a recorded radio address across the Empire on announcing surrender of Japan. Yet, Vice Admiral Matome Ugaki, the commander of the IJN 5th Air Fleet, participated in one of the final kamikaze attacks on American ships on 15 August 1945, hours after Japan’s announced surrender. Such was the covenant with death these Bushidos swore.

History has no known records of such massive and premeditated self-destruction, as it did with the Warriors of the Devine Wind. For 2 years, thousands of young men went round planning their own annihilation; learning skills, training minds & priming spiritually to respond to call of supreme duty. They did this very meticulously, relentlessly, rehearsing steps of ‘Tango with death’. When final order from his Commanding Officer came – ‘You are destined’ the instantaneous, unshakeable ‘Hai’ was predestined; driven by the Imperial Rescript –“One’s duty was indeed weightier than the mountains, that death was lighter than a feather.” The weight & significance of Honour & Loyalty was & still would be far beyond understanding of the ordinary & Occidental minds.

The mystique of a Kamikaze will never be unravelled. Human kind shall remain anaesthetized in both cases – The tales of Devine Winds & those of the Little Boy & Fat Man. The simple yet powerful message Heiwa (Peace) at Red Hill Peace museum shall always be relevant, if mankind has to recover from the fallouts of both these monstrous minds.  ‘Heiwa’ to all.