Urban forest with 12,000 seedlings to act as role model for offices in Delhi 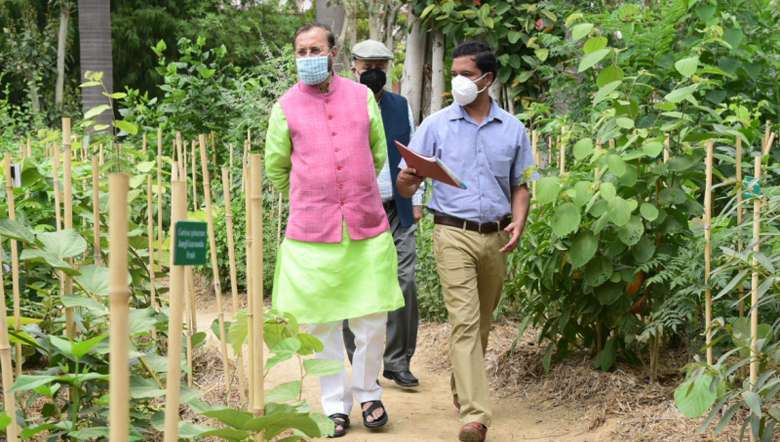 Prakash Javadekar inaugurates an urban forest at the office of Comptroller and Auditor General of India (CAG), in New Delhi on July 02, 2020 (PHOTO: PIB)

Urban forest with 12,000 seedlings of 59 indigenous species will act as a role model for offices in Delhi, Union Environment Minister Prakash Javadekar said on Thursday.

The Environment Minister was speaking on the sidelines of the inauguration of an urban forest with 12,000 saplings of 59 indigenous species at the office of the Comptroller and Auditor General (CAG) of India, located at Bahadur Shah Zafar Marg in New Delhi.

"Today inaugurated a unique Urban Forest at the Office of the CAG of India. Urban forests are the lungs of cities, acting as an oxygen bank and carbon sink," Javadekar tweeted.

With the Air Quality Index (AQI) of Delhi becoming an increasing cause of concern, the urban forest will act as a role model for offices in Delhi, Javadekar said.

"The urban forest with 12,000 seedlings of 59 indigenous species will act as a role model for offices in Delhi. Happy to note that Miyawaki method of forest creation is used which could help in reducing the temp. by as much as 14 degree & increase the moisture by more than 40%," the environment minister said in another tweet.

According to a release, the urban forest is made up of trees which are native to the area and are three dimensional, multi-layered communities having 30 times the surface area of the greenery of single-layered lawns, and have more than 30 times the ability to protect against natural disasters and to conserve the environment.

The urban forest which has an ecosystem with the capacity to restore habitat for birds, bees, butterflies and microfauna will be self-sustainable by October 2021, the release stated.

On World Environment Day 2020, the government had announced implementation of the Nagar van scheme to develop 200 Urban Forests across the country in next five years with a renewed focus on people’s participation and collaboration between Forest Department, Municipal bodies, NGOs, Corporates and local citizens.