The felicitation and reception of A Sharda Devi was organised under the aegis of BJP Kangpokpi Mandal on her maiden visit to the district. 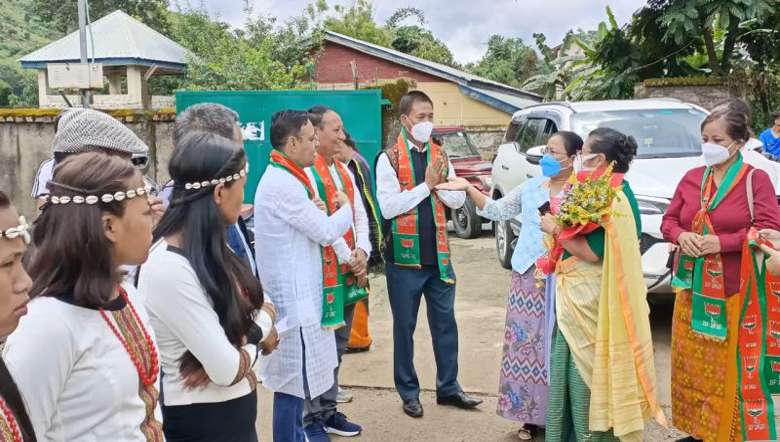 The felicitation and reception of A Sharda Devi was organised under the aegis of BJP Kangpokpi Mandal on her maiden visit to the district.

“Our mission in the coming 2022 general assembly is to target 40 plus BJP MLAs in the state which is a strategy and targeted plan during the tenure of our beloved former President (L) Prog S Tiken Singh,” A Sharda Devi said.

“I will give priority to the women candidate. Kangpokpi is very fortunate to have a dynamic woman leader and representative,” she said.

She also stressed the capabilities of women in nation-building and the power of women in decision making in society. “It is very clear that the BJP Government under the leadership of Prime Minister Narendra Modi has introduced various schemes and projects for uplifting women and we have witnessed dramatic changes in the uplifting and welfare of Indian women,” she said.

MLA Nemcha Kipgen said, "We hope our dynamic president A Sharda Devi will cherish the party target of 40 plus MLAs in the coming general assembly election and bring more changes and development in the state.”

The people of Kangpokpi are fortunate to felicitate the dynamic woman leader and heartily congratulate her on her appointment as the BJP Manipur Pradesh President, she said. “We also convey gratitude to the central leaders for giving us such a leader,” she added.

Under her leadership, Beti Bachao, Beti Padhao mission will be an empowerment of the women of the state and the nation as a whole, Nemcha added.

President BJP Kangpokpi Mandal Tingnei Lhouvum  while congratulating A Sharda Devi, said that the assignment given to her shows clearly that she is a hardworking, accountable and BJP is a party which pays much attention for the empowerment of women.

People of Kangpokpi urged Sharda Devi to support BJP MLA Nemcha Kipgen in the coming general assembly election while ensuring that the women community of the district will fully support and cooperate with her in her endeavours.

Apart from various party leaders, various communities of the district also attended the function while the Nepali cultural troupe also presented a cultural dance during the occasion.