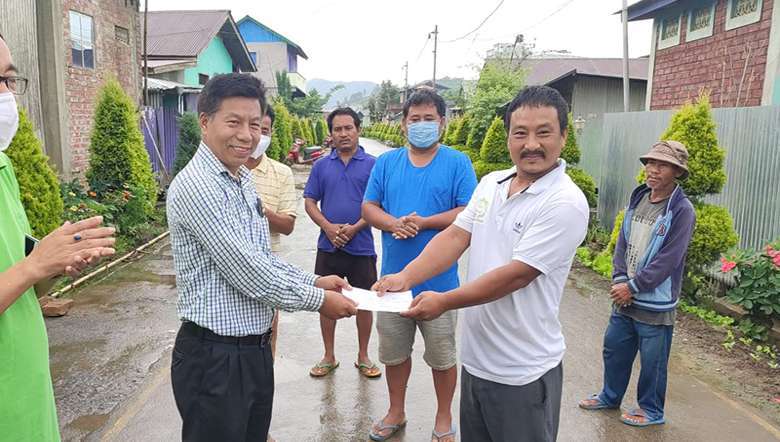 The RO Munal voluntary reached out to the Committee and provided the monetary assistance on Wednesday.

Talking to the reporters at the site, Munal expressed that Kakching Ayangbung lane became the most cleaned among the lanes of Kakching Municipal Council. It was the result of the dedication and hard work of the Development Committee of the lane and also due to the collective support from every household residing in the lane, he said.

The lane now looks so beautiful that it may be compared to a lane of a foreign tourist spot, he remarked. The tender trees which are grown on both sides of the lane make it most scenic, he further said while adding, “As a token of gratitude to the Development Committee, a small amount of monetary aid is provided from my own pocket”.

Munal also appealed that all should follow the efforts of the Committee and try to emulate the work done at Ayangbung.

In 2017 Kakching Municipal Council received the cleanest town award across the country. “We should try to clinch the title in the years to come. Unity should be our tool, one who hails from a land that has unity, love and beauty will get tremendous respect everywhere, Munal told.

He added, “We should make Kakching the cleanest town of the state. Growing trees abundantly is more beautiful than constructing many buildings.”

On the other hand, the Kakching High School 1984 Matric Batch alumni on Tuesday had planted several tree saplings at the historical memorial site of Kakching Machil Manao Hill Range where the soldier Wangkhei Meiraba Poila and his team got martyred during Anglo Manipur War of 1891.

The event was led by N Munal meitei who is the president of the batch. He stated about the usefulness of tree plantation and historical importance of Kakching Machin Manao Hill Range.