On this very day of September 21 in 1949, the then Maharaja of Manipur Bodhchandra was forced by the Union of India to sign the Merger Agreement which led to merging of Manipur to India, AMKIL president in-charge Lourembam Nganbi said. 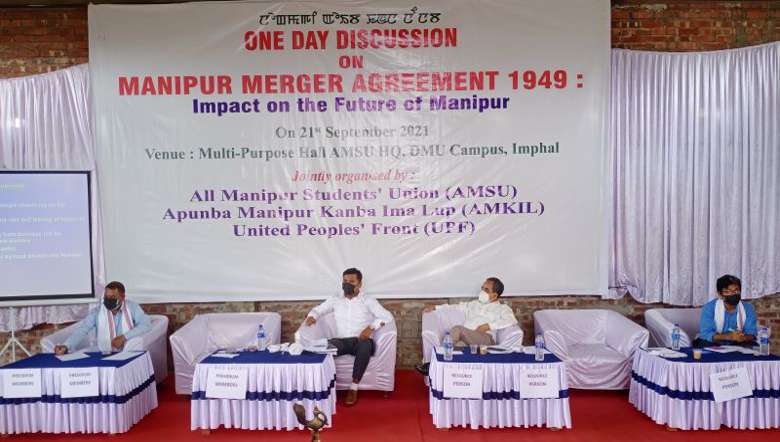 She was speaking to the media on the sidelines of the "One day discussion on Manipur Merger Agreement 1949: Impact on the Future of Manipur" held on Tuesday at the headoffice of All Manipur Students' Union (AMSU) in Imphal.

It was jointly organised by AMSU, AMKIL and United Peoples' Front (UPF).

Nganbi questioned why AFSPA is still not repelled from the whole area of Manipur when the government already declared that the law and order situation has improved.

She said since the day Manipur was merged with India, outsiders had been slowly taking control of the state and had endangered the indigenous population of Manipur.

Moreover, many crimes had been committed by the armed forces in the name of fighting militants groups and are unable to safeguard the rights of the people and territory of Manipur, she added.

On the other hand, the past and present elected leaders of Manipur are unable to work as per the wishes of the general public without the consent of the Centre, Nganbi continued.

She said that the only solution to all such grievances faced by the people of Manipur will be the restoration of the pre-merger status of Manipur as per the Instrument of Accession signed in 1947 between Manipur and India.

Nganbi said on this very day of September 21 in 1949, the then Maharaja of Manipur Bodhchandra was forced by the Union of India to sign the Merger Agreement which led to merging of Manipur to India.

The day is still regarded as a ‘Black Day’ by the people of Manipur, she said, adding, “We will continue to demand the pre-merger status unless and until it is given.”