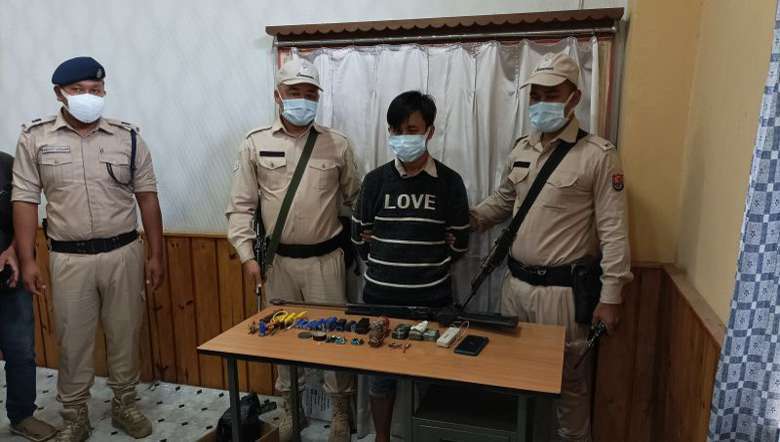 One active member of proscribed UG outfit PREPAK (PRO), who was involved in bomb blast in front of Chief Minister’ bungalow and at Route 39 restaurant, Mantripukhri on different occasions, was arrested on Tuesday by Imphal West district police and seized explosive device used for monetary demands.

Speaking to media persons, Imphal West SP, S Ibomcha said that based on reliable information about the presence of some active cadres of PREPAK (PRO) in and around Lairikyengbam Makha Leikai, a team of Imphal West district police conducted cordon and search operation in and around the area including some suspected houses on Tuesday.

The police team was led by officer-in-charge, commando unit, P Achouba Meeitei under the command of additional SP (Ops), Amarjit Lamabam and under the supervision of SP, Imphal West.

During the operation, Joyshankar was arrested from his residence at around 5 am. He revealed that he joined the proscribed outfit in 2009 through one Herojit from Salanthong and got basic military training for three months at Ngayensong, Myanmar, said Ibomcha.

The SP continued that the accused was allotted army number 39914 of 39th batch holding the rank of lance corporal of PREPAK (PRO) and presently working under the command of self-styled captain Jiten and chairman Subhash alias Palheiba alias Muni of the said outfit.

On preliminary questioning, Joyshankar disclosed that he had threatened Naoroibam Boge of Lairikyengbam Makha Leikai by lobbing two Chinese hand grenades and exploded at the paddy field near his house at around 12:30 am on the same day. He further disclosed that he was involved in the IED attack at CM's bungalow on August 10, 2013 and at Route 39 restaurant, Mantripukhri on August 17, 2013.

The arrested person and the recovered items have been handed over to Lamphel Police Station for further legal action, said the senior police officer.