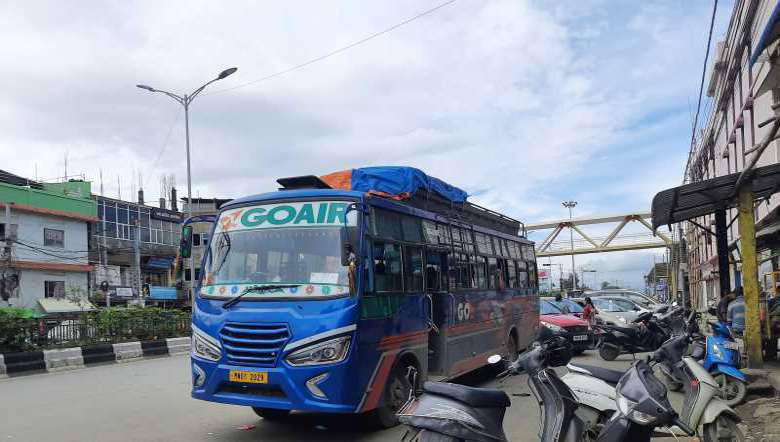 Inter-district bus waits for passengers on first day of resumption of bus services on July 2, 2020

Majority of the inter-district bus stations in Imphal wore an empty look amid the lockdown on Wednesday, the first day of the resumption of the state transport services following the government order.

The state government order issued on Tuesday permitted state inter-district bus and minibus services to resume operation on Wednesday, but prohibits movement of private taxis and auto-rickshaws. With no public transport to commute, the common man may find no way to reach the bus stations.

Except for Imphal-Churachandpur bus service which resumed with nine buses operating for the day, bus stations for other districts remained empty.

Despite the few takers for the bus services, travel fare was hiked, which may deter some people to use the bus services while the fear of COVID-19 spread lurks in their minds.

The bus drivers for Imphal to Churachandpur district doubled the bus fare from the normal rate, citing increase in fuel prices and decrease in passenger intake.

Speaking to the Imphal Free Press, one of the drivers said, “We have to double the bus fare from the normal rate because the fuel price is increasing and we are allowed to operate with only 50 per cent seats capacity”.

Besides, there is a small turnout of passengers and the bus drivers have to wait for around 50 minutes to fill 50 per cent of the passenger seats, the driver said.

Before the lockdown was enforced in the state to contain the spread of the coronavirus, it took only around 10 to 15 minutes for the entire seats to become fully occupied, the driver said, adding that around 60 bus services usually transport passengers from Imphal to Churachandpur daily before the lockdown.

However, despite the hike in bus fare, some people, who are pursuing their studies and staying in rentals in Imphal, choose to travel home, saying they would rather stay home with their family members during this crisis time.

One of the passengers, Minlun Khongsai said, “Even if the bus fare is high, I have decided to go back home. I would rather stay with my family instead of continuing to pay monthly rent in Imphal without going to college due to lockdown”.

He also said that staying alone in Imphal during the prevailing situation worries his parents living in Churachandpur.

Another passenger, Henpithang said, “Many of my personal works remained incomplete due to the lockdown. So, I have taken the opportunity given by the government to go back to Churachandpur to complete my works by paying the bus fares charged by the bus driver”.

Meanwhile, president of the Transporters’ and Drivers’ Council (apex transport organisation of all commercial vehicles in Manipur) Hijam Ranjit is hopeful of other bus services to hit the road soon.

Speaking exclusively to the Imphal Free Press, Ranjit said that Churachandpur bus service has been resumed as the first one and other inter district bus services will also resume in a few days.

Meanwhile, necessary preparations have been made to deport passengers from Jiribam to Imphal on July 3, he said.

Ranjit also informed that drivers and the council have not received any instructions from the state government regarding the bus fare. The council has not fixed any rate for different districts as of now, he said. The bus fare will depend on the mutual understanding between the bus drivers and the passengers, he added.