inaugurated the Churachandpur permanent campus of NIELIT at Churachandpur, Imphal, Aizawl (Mizoram) and Kokrajhar and Tejpur (Assam) on Thursday. 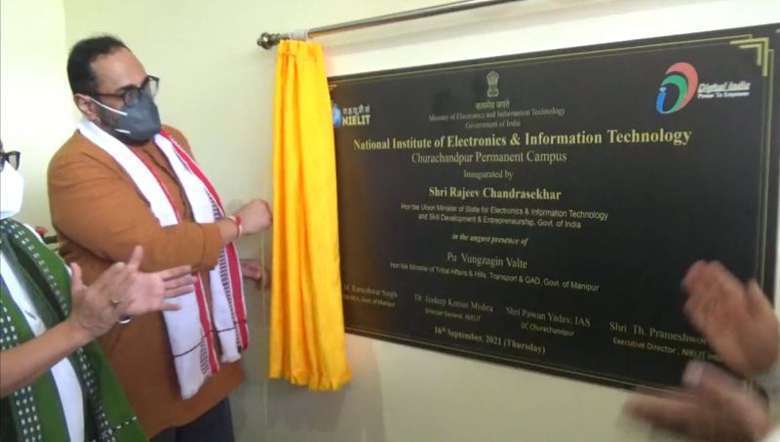 The union minister reached at Imphal on Thursday and personally visited Churachandpur to inaugurate the centre. He inaugurated other NIELIT centres at Imphal, Aizawl (Mizoram) and Kokrajhar and Tejpur (Assam) through video conferencing.

During the inaugural programme at Churachandpur, Chandrasekhar said that he has been tasked with two portfolios by the Prime Minister just 45 to 50 days ago to empower the youths. He said that he did not come to Manipur just to inaugurate a building but to interact with the students in a manner that they share their thoughts to him so that they can progress with India's future of ‘Digital India’ and ‘Skill India’.

Prime Minister Narendra Modi’s vision is to transform the livelihood of people and give opportunity to northeast states and empower the women of the region, he added.

He continued that 45 per cent of women are employed in HR of electronics and information technology sectors, and around five lakh jobs are created this year in the IT sector and another three lakh in the electronics sector. He said that NIELIT will soon bring many jobs and the students in this field should use the available facilities wisely.

NIELIT director general Jaideep Kumar Mishra called the inauguration of NIELIT in Churachandpur as a historic day for the people and NIELIT family. He said that there are 43 such centres in India with 900+ accredited centres where more than 60 lakh people are trained since 2014. With inclusion of northeast India where 15 such centres are set up, the training process would be peculiar as many are from economically weaker sections.

The Churachandpur DC thanked the union minister for coming in person to inaugurate the new building of NIELIT in Churachandpur as priority. He said that NIELIT in the district was operational since 2013 at the campus of Churachandpur High School, Tipaimuk road until the official building was inaugurated on Thursday.