The Hindi imperialists should try to liberalise their vision and learn to respect the rest of the languages whose right in democratic India of all linguistic groups is not a bit lesser than Hindi. 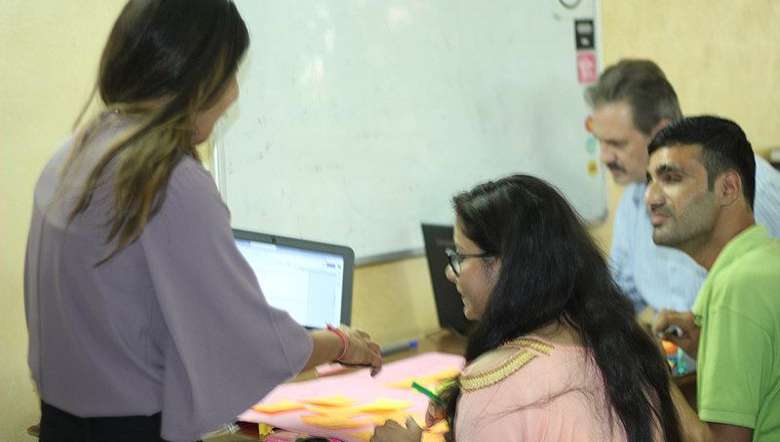 "Hindi echoes the voice of integration. This is the language of tolerance and nationalism" --- just paens and paens on Hindi as if no other language exists in India or it is nothing but "God's Gift" or manna from heaven raining upon the soil of India!

Does this statement directly imply that Kashmiri to Kannada, Marathi to Manipuri i.e. rest of the rich Indian languages, which form the tongue of more than 60 per cent of Indian population, are languages of "intolerance" and "anti-nationalism"!

The brute imposition of Hindi in various spheres, often by discarding the indigenous languages in its own land --- as witnessed in various Bengali-less important display boards or public notices in various railway stations in West Bengal --- bear direct proof how "tolerant" the language Hindi is! Actually the fault does not lie with Hindi, rather fault lies with the Hindi speakers/promoters of imperialist mindset. Instead of asking others not to have a "narrow view" of Hindi, the Hindi imperialists should try to liberalise their vision and learn to respect the rest of the languages whose right in democratic India of all linguistic groups is not a bit lesser than Hindi. So far from acting as a "Unifier" or "voice of integration", Hindi acts as nothing but a disintegrating force compelling the Tamils Kannadigas Marathis to Assamese to vehemently protest when the language of the North Indian states are proposed to be compulsorily taught in schools throughout the multi-lingual heterogeneous nation or recruitment examinations are desired to be taken in only English and Hindi by remaining absolutely indifferent to the other Indian languages!

Making Hindi the dominant language has resulted in a particular linguistic group getting an upper hand in all sectors and given its speakers an added advantage in the limited job market, the resultant inequality flouting all norms of democracy. In many national-level examinations, candidates are required to answer in English and Hindi only. Thus when a Hindi-speaker(with scant knowledge in English) can boldly answer fluently in his/her mother tongue, a non-Hindi speaker (if equally handicapped in English) cannot exercise such an option. What a blatant unfair advantage in favour of Hindi-speakers and gross prejudice against the speakers of  non-Hindi languages! Thanks to the use of Hindi in railway recruitment board examinations, the candidates from North India were bagging the lion's share of the jobs which compelled the proud Assamese, Kannadigas and Marathis to launch violent protests. But the then Railway Minister in Mamata Banerjee rightly ensured examinations to be conducted in all scheduled languages of India, thereby putting all languages on an equal pedestal. And thereafter the railway recruitment board examinations have started to get conducted smoothly. Thus it has been proved crystal-clear that Hindi merely serves as a tool to divide the Indians and invoke regionalism.

If a regional language of North India gets crudely imposed upon the rest of the country and more than 60 per cent of the Indians of non-Hindi speaking vintage, naturally counter-regionalism will also prosper according to Newton's Third Law of Motion. Unity in diversity can be attained by respecting and nurturing diversities, not by killing the cultural heterogeneity or imposing a particular language upon the rest. Thanks to such sole pamperment and State sponsorship of Hindi through decades which have attained sky-high in "New India"; a section of the countrymen have started to treat Hindi as synonymous to "Royal might"("Rajbhasa"!) with themselves being the "Raja" and rest of the innumerable Indian languages(and their speakers) as mere "subjects"! And just due to such an imperialist mindset, the Indian credentials of none other than a Parliamentarian (DMK MP Kanimozhi) can be questioned, that too right in Chennai airport situated in Tamil Nadu, for her "anti-nationalism" of not speaking in the language of Bihar-Uttar Pradesh ! If even a public figure like Kanimozhi can be humiliated for her ignorance in Hindi, it can be easily concluded what the common non-Hindi speaking citizens face in their own country!

Perhaps the flag-bearers of Hindi are unaware or cleverly trying to hide the fact that though Hindi gets zealously projected as the "National Language"; at the end of the day,  there is no provision of such status in the Constitution. Rather, a bench of Gujarat High Court, comprising Chief Justice S.J.Mukhopadhaya and Justice A.S.Dave, had categorically opined that there is no National language in India. And again a bench of Gujarat High Court, headed by Justice V.M.Sahai and  A.J.Desai, had categorically declared that Hindi is a "FOREIGN language" in Gujarat! If this opinion is taken in the right spirit, it directly implies that Hindi is merely a language of few North Indian states; but beyond the heartland,  it is nothing but an alien tongue. After all India is a conglomeration of different states, each possessing a distinct linguistic and cultural identity of its own. How can such colourful rich diversities be allowed to get subjugated under Hindi?

Thus, those who zealously project Hindi as the "national language" are merely assaulting the very basis of  the Constitution and the powers who are imposing Hindi upon the non-Hindi speaking population are actually demeaning the esteemed judiciary.

Yet under the leadership of the regime based upon the imperialist ideology of 'Hindi-Hindu-Hindustan'; this multi-lingual multi-religious secular diverse democratic nation is being cleverly demeaned into a highly intolerant cesspool or colony of Hindi-speaking upper caste Hindus.

So it is being scandalously witnessed how Hindi is not only being imposed upon this land of linguistic diversities and this heterogeneous Indian society is getting addressed  in the language of Bihar and Uttar Pradesh; the lion's share of Central funds related to promotion of languages are also being allocated to Hindi only. Is the right of any other language in India a bit lesser than Hindi? Yet the Central regime zealously proclaimed(a few years ago) that not a "mere" Rs.40 crore, but the Government is "ready to pay even Rs.400 crore if required" to make Hindi one of the official languages of the United Nations! Why will the tax from the hard-earned income of the non-Hindi speakers(who form more than 60% of the Indian population) be squandered to pamper the language of few North Indian states? Is it a clever ploy to impart an image in the international community that India is "actually a monolingual Hindi-speaking country"? Narendra Modi's speeches, religiously in Hindi, in international forums certainly add "glory of Hindi", but doesn't add glory to the multilingual fabric of heterogeneous India!  All true Indians are indeed ashamed by witnessing the fangs of Hindi chauvinism and muscle flexing of the linguistic imperialists.

It is high time all non-Hindi speaking Parliamentarians, individuals, intellectuals, press and state Governments residing outside cowbelt should unitedly protest against the parochial imperialist stance of projecting "Hindi is India" in international forum and such barbaric squandering of resources in the name of it's "promotion"(actually imposition) which can otherwise be properly utilised for the welfare of common Indians.

Last but not the least. According to the 1961 census, India was hosting 1100 living languages at that time. However, a 2017 study carried out by the Bhasha Research and Publication Centre in Vadodara, under the title “People’s Linguistic Survey of India”, arrived at the conclusion that India has seen the death of 250 languages in the last 56 years! Also the study has foreseen the death of another 400 languages in the next 50 years! So India would be then left with merely 450 languages within its geographical boundary. Going at this rate, it means that in just over a century, Mother India is set to witness the unfortunate loss of 650 languages from her lap with each year killing an average of 6.5 tongues!

Extinction of hundreds of languages indicates the disappearance of diversity from the face of the earth. With the loss of languages, we lose entire societies, their culture and a storehouse of indigenous wisdom. The concerned authorities should rise to the occasion to rescue dying languages and cultures to keep heterogeneity and the spirit of "equality of all languages" alive, else it will not reflect the Indian democracy in a glorifying light..

Mother tongue remains the most basic identity of an individual or a community. If it does not get its due place under the sun, then the community which speaks it is bound to meet its doom. This is primarily the reason behind UNESCO's decision of designating 21st day of February( a red-letter day of Bengalis fighting against Urdu imperialists in erstwhile East Pakistan) as International Mother Language Day, thereby stressing the importance of mother tongue in one's life. Just as a child cannot be detached from his/her mother, similarly it would be nothing but a crime if any community gets robbed of its mother tongue just because it does not enjoy any political-economic-numerical-muscular advantage, strength, clout and influence.

In 2010, the last speaker of Aka-Bo language passed away in Great Andaman along with the tradition and culture associated with the language. She was named Boa Sr and this speaker of one of the world’s oldest languages met her end on Republic Day (26th January) which is certainly not a very good advertisement of the Indian Republic --- constitutionally based on the noble concept of democracy ie equality of all!

However there lies no utility in crying over spilt milk. But if we try to regard ourselves as civilised, then we should definitely ensure that such scandalous history of literally fatal indifference to marginalised language and its speakers does not get repeated in future. Protection and promotion of each and every language of India should be the urgent need of the hour. So the Union government should see to it that all funds related to promotion of languages do not get usurped by Hindi only. After all, the right of any other language (be it scheduled or non-scheduled) in India is not a bit lesser than Hindi. Thus if an equitable distribution of Central resources is ensured, it would benefit the cause of all languages and dialects (specially the endangered ones)  to a great extent.