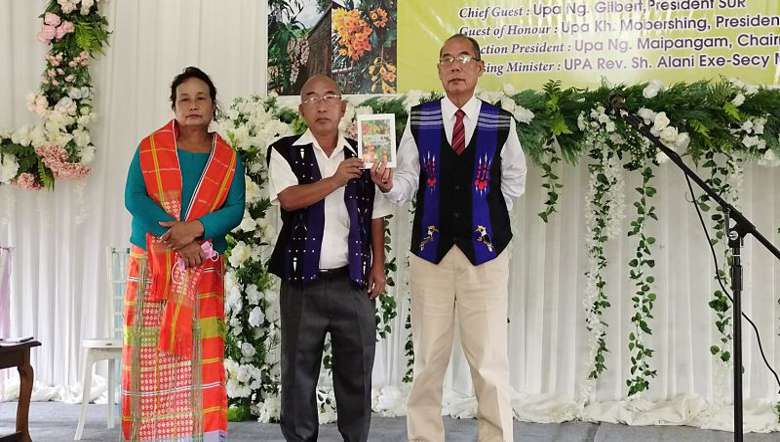 A book entitled ‘Indigenous Flowers of the Monsang Land: Sirti Paamna Isuwh Rii’ was released at a function held with strict adherence of COVID-19 protocols at Liwa-Sarei Community Hall, Chandel on Wednesday.

Speaking on the occasion, author of the illustrated book Upa Ts Ngamtin who is also chief of Liwa-Sarei village recollected the memories of the enormous challenge he undertook since 2015 to study and record the vanishing flowers from Monsang forest land at the backdrop of extensive deforestation and jhuming cultivation culture.

The author shared an anecdote from Monsang folk songs in which the Monsang forefathers considered the youths as flowers. In the olden days, the enjoyable days of youth are compared to a blooming flower, he said.

Generally, the flowers represent females in the traditional concept of the Monsang elders, he mentioned. They also assumed that there were male flowers too. Therefore, when a youth gets older they say the flower has turned pale and dried, he added.

Believing that the flowers are vanishing at the cost of ecological imbalance driven largely by deforestation and jhuming cultivation, the need to pen down the flowers for future generation became a deepest concern as per the author. He was able to find almost 129 flowers of various types and families in Monsang land, he mentioned.  He said that the varied categories of flowers are found along the river side, along the stream side, within the rocky areas, on the slate rock, bushy places, steep hill, on the tree, etc. They are available in almost throughout all the seasons according to the author, he mentioned.

Interestingly, the flowers are used for different purposes, including consumption, aesthetic and medicinal benefits.

Upa Ng Gilbert expressed his profound gratitude to the author for taking up such challenges apart from his responsibility as a village chief.

The vision to safeguard and protect the endangered species of flowers found in Monsang land is commendable, he said. According to him, though Monsang inhabited areas are relatively small yet there is plenty of research to be done from cultural and academic perspectives. He also emphasised the young students to shoulder the responsibility to research and write more in future.

The officials on the dais in their speech appreciated the author for showing exemplary work. It is considered an asset as research and studies on the Monsang community are sparse till date. The book is believed to serve as a reference guide and open more windows for further studies among the Monsang community.