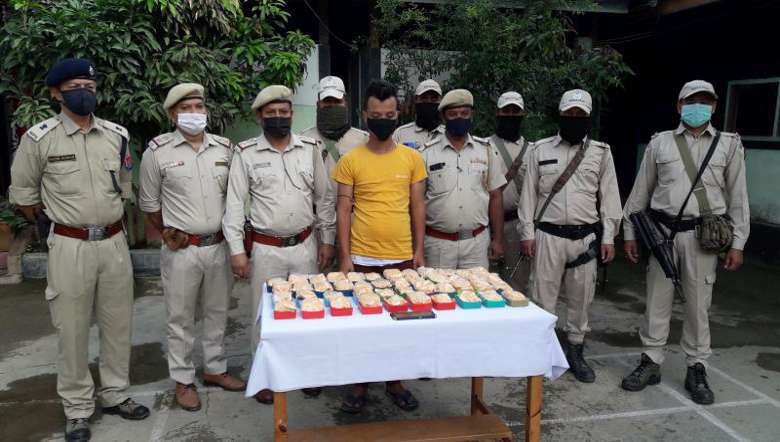 Superintendent of Police Thoubal Jogeshchandra Haobijam said that a team of Lilong police station arrested a man while 45 soap caps which contain suspected Heroin powder inside plastic packets were seized from his possession on Wednesday at around 1.30 am.

During a press briefing at the office of the SP, Thoubal where the arrested person along with the seized drugs were produced, the SP briefed that on Wednesday at about 01:10 am, the police received a specific information that some drug smugglers were loitering around Lilong Arapti Lamkhai Inter Village  Road. After verifying the report, it was forwarded to officer in-charge, Lilong Police Station, the SP said.

Accordingly, after obtaining search authorisation from superintendent of police, Thoubal, a team of Porompat Police Station Imphal East and a team of Youth Athletic Development Association (YADA) Lilong with a police team led by OC Lilong Police Station Md Riaj khan including woman police, under the supervision of Sachidananda Soibam, additional superintendent of police (Ops) Thoubal and under the overall supervision of SP himself rushed towards Lilong Arapti Lamkhai Inter Village Road, the SP continued.

SP further said that on reaching the spot, the police team saw two-three persons loitering there and on seeing the police team, they fled from the spot but one person was overpowered and he was detained for verification.

On searching his belongings in a black colour polythene, the police team detected 45 soap caps which contained suspected Heroin powder inside the plastic packets. The weight of the plastic container when weighed by using weighing balance, was totalling 573.5 grams, SP added.

He disclosed that the seized drugs were purchased from one Hanif alias Babulu of Moreh.

The accused was arrested along with the seized articles. A case is being registered at Lilong Police Station, SP Jogeshchandra added.