Rihanna 'closed out the night' in bewitching black at Met Gala

Rihana showed up late in a custom Balenciaga Couture with her boyfriend A$AP Rocky at Met Gala, but did not disappoint. 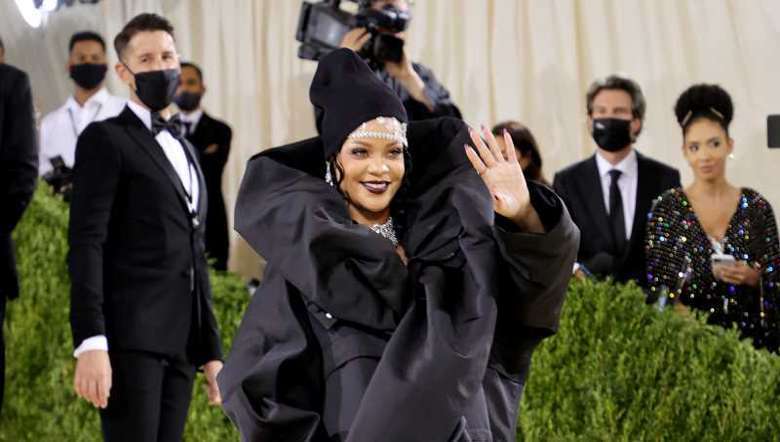 Rihanna walked in late at the Met Gala 2021, all draped in black. But she did not disappoint as her bewitching looks on the red carpet turned heads and was greeted with shouts of surprises and cheers from the crowd of camera persons and fans who have been impatiently waiting for that one moment in time.

“Finally, the moment we've all been waiting for. #Rihanna has arrived at the #MetGala,” Grazia posted on Twitter.

The American-Barbadian singer, actress and fashion designer arrived in a custom Balenciaga Couture with her boyfriend A$AP Rocky wrapped in a bright multi-coloured quilt at New York’s Metropolitan Museum of Art.

"Rih closed out the night by arriving in a head-turning gown, courtesy of Balenciaga, and her boyfriend, rapper A$AP Rocky, in tow. The star paired the dramatic couture creation with a crystal-embellished knit beanie, a statement-making diamond choker necklace, and a plum-hued lip. Rocky wrapped himself up in a vibrant quilted blanket as he posed for pictures alongside Rih." — Harper's Bazaar captioned a picture of the two posted on Twitter.

Several others also took to Twitter and posted pictures and videos of her grand arrival.

The Cut tweeted: “Just when we thought she might not show up: Rihanna has arrived at the #MetGala red carpet https://thecut.io/3tHSw8f”

The Made-in-USA fashion event is being held after it was shelved for a year due to the pandemic. Timothée Chalamet, Billie Eilish, Amanda Gorman and Naomi Osaka are co-chairpersons for the event, while Tom Ford, Instagram’s Adam Mosseri and Anna Wintour are honorary chairs, according to sources.