The Manipur CEO expressed hope that there will be a good participation of the entire state in promoting ethical voting on polling day. 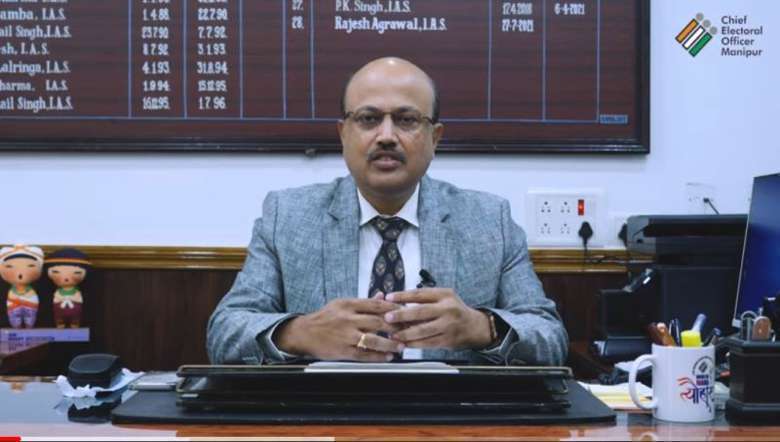 In a video clip released on Friday, Rajesh said, “Elections in Manipur are around the corner and we are expecting to conduct the assembly election for selecting a new government of the state in the first quarter of 2022”.

Rajesh said elections in many states are critical for a strong democracy and Manipur has always been in the forefront of conducting free and fair as well as participative elections year after year.

The CEO said a publicity campaign in the form of Systematic Voters Education and Electoral Participation (SVEEP) campaigns has been launched in the state.

The campaign intends to make the citizens of the state aware about multiple initiatives taken up by the Election Commission of India to make the whole electoral process a seamless affair and enjoyable, wherein an eligible voter at the comfort of his house using online facility or mobile phone can register oneself as a voter, he added.

Once registered, the people can get access to all information regarding the polling stations, day of poll, candidates and overall awareness about the electoral process online, the CEO said.

Rajesh informed that the idea to use such technology in elections has been to make the whole of the electoral process a transparent affair, wherein there is complete credibility of the process established and that there is confidence in the minds of every voter that their vote actually matters.

Through SVEEP campaigns, there is a hope that more voters will be convinced to register themselves as a part of the summary revisions that will be initiated from November 1 onwards, he said.

“We also expect that we will be able to establish the credibility of the whole electoral system and build confidence in the voters to come out and vote in a big way on the poll day,” the CEO said.

Rajesh stressed on the need to further improve the record turnout of 86 per cent in the last assembly elections in the state to a much higher level so that it set higher standards not only for the state but also for other states to evaluate.

The CEO further said that the whole electoral process is a cooperative exercise wherein every arm of the government comes together and helps each other to conduct free and fair elections.

Rajesh expressed the hope that there will be a good participation of the entire state in promoting ethical voting on polling day and that voters will come out in a big way to vote for electing a new government for the state.