Manipur government will give more autonomy to ADC: CM Biren

N Biren Singh said that Go to Hills mission is a way to ease the hill people in getting the various beneficial schemes of the government by giving door-step delivery. 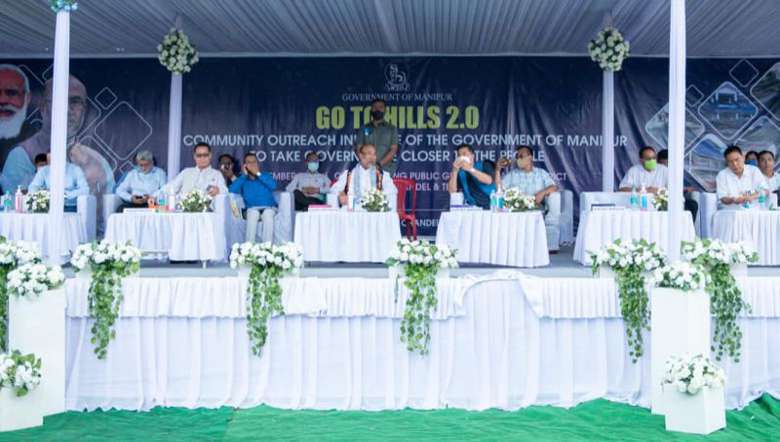 He was addressing a gathering at Chakpikaron public ground during the launch of “Go to Hills 2.0” for Chandel and Tengnoupal districts.

Clarifying on the proposed ADC Bill 2021, he explained the reason why the bill was not tabled in the Assembly was owing to time constraint to discuss the bill thoroughly.

“The state government is thoroughly discussing the bill. The government also aims to give more autonomy to ADC, within the ambit of the Indian Constitution, for the welfare and development of the people of the hill region”, said the chief minister.

CM Biren also questioned the intention “why the bill was never introduced during the last four-and-half years duration, but only during the recent two day sittings of the Assembly?"

Nonetheless, he assured that the BJP-led government will safeguard the interests, rights and provision of all ethnic groups settling in the state.

The politics of the present government clearly rely on humanity, he said citing the various developmental and welfare works taken up by the government such as introduction of CMHT, Go to Hills and Go to Village programmes, establishments of, trauma centres and oxygen plans in all the districts and others.

Highlighting the developmental works, he said during the previous government only 5.7 per cent of the household of Manipur got the facility of tap water, however the percentage increased to 51 per cent during the four and half rule of the BJP-led government.

The government is putting sincere effort to increase the percentage to 80 per cent before the upcoming Assembly election, added Biren.

Elaborating on the Go to Hills mission, he said it is a way to ease the hill people in getting the various beneficial schemes of the government by giving door-step delivery.

Biren cautioned the people not to succumb to the ploy of vested interest individuals who are envious of progress.

The chief minister also announced that a white paper of all the developmental projects being taken up during the BJP led government will be in public domain soon.

Asserting that the Go to Hills mission has bridged the gap between the people of hills and valley, he said the public should appreciate such initiatives taken up by the government.

Works Minister Th Biswajit delivering his speech stated that the state government is working at its best level with limited resources to combat the pandemic.

He appealed to people in the hill districts to get vaccinated to prevent Covid infection citing reports of low vaccination rate in hills.

During the programme, the chief minister inaugurated 28 developmental projects and laid foundation stones for five projects in Chandel and Tengnoupal districts.

Government assistance was also distributed to 149 beneficiaries and three colleges of Chandel and Tengnoupal districts.