The MPCC VP said that the statement made by the education minister at Mayang Imphal playground during inauguration of Agro Market Complex on September 8 is completely wrong. 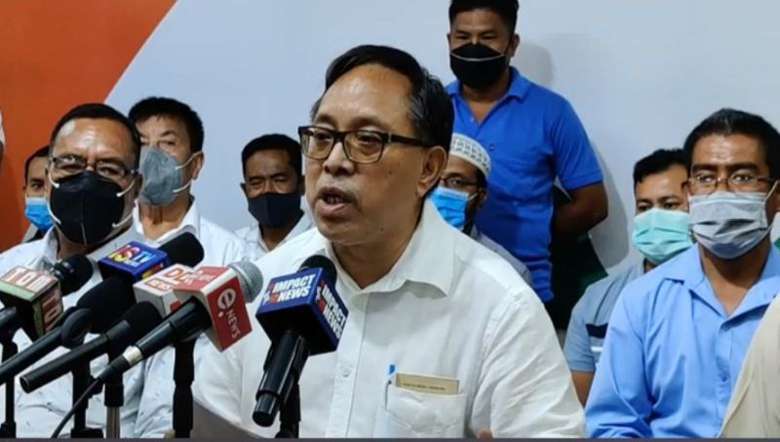 Manipur Pradesh Congress Committee (MPCC) vice president Ratan Kumar on Friday refuted the claims of Education Minister Sorokhaibam Rajen that the Congress did not take up any project for Mayang Imphal assembly constituency during its governance.

Briefing the media at Congress Bhavan Imphal on Friday, Ratan Kumar said that the statement made by the education minister at Mayang Imphal playground during inauguration of Agro Market Complex on September 8 is completely wrong.

Ratan kumar said the Education minister has made some wrong statements in connection with certain projects taken up at Mayang Imphal and such statements can mislead the people.

He said that most of the projects presently undergoing at Mayang Imphal assembly constituency were sanctioned and initiated under the Congress government from 2007 to 2017.

The recently inaugurated Agro Market was proposed and recommended by the former chief minister Okram Ibobi Singh during the 2014-15 financial year during Congress rule. The project was raised to the North Eastern Council (NEC), and it was sanctioned in the year 2016, said Ratan Kumar.

However, the Congress government could not take up the project as the tender process could not be completed due to the assembly election in 2017, he added.

The MPCC vice president further said DIET centre was shifted to Mayang Imphal from DM college campus after information was received at that time that the DM University was about to be established at DM campus.

Previous governments may be replaced by another party by forming a new government. However, the government policies are a continuous process, he added.

“How can we bring developments and implement projects if the policies taken up by the previous government are replaced every time a new government is formed?” he questioned.

The Education minister must not take the people of Mayang imphal as fools and ignorant, said Ratan.  Minister Rajen must openly declare it if he has any intention to shift the DIET centre to his assembly constituency, he said.