Kanglatongbi Gorkha Youth Association demanded that the authority concerned must book the culprits involved in the incident by Thursday. 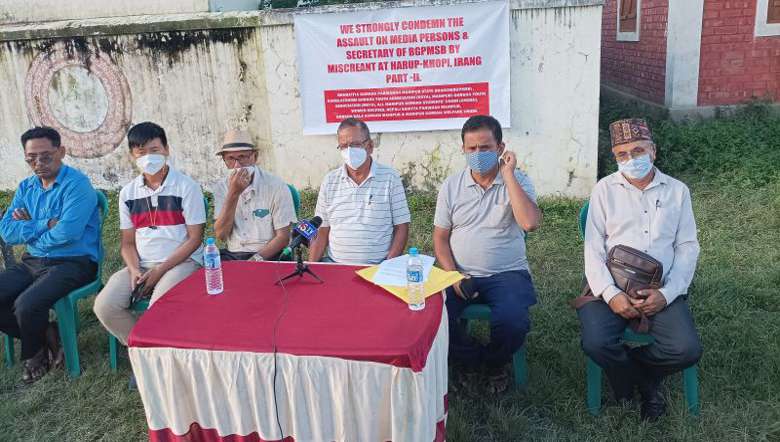 A scribe was allegedly assaulted by a group of unknown persons after coming back from media coverage of an election proceedings at Harup village, Irang Part-II, Kangpokpi Tehsil, Senapati district on Tuesday.

Speaking to the media persons during a press conference held in front of All Manipur Gorkha Students’ Union office, Kanglatongbi on Wednesday, Kanglatongbi Gorkha Youth Association president Shivkumar Basnet said that a reporter named Rahul Rai, who is working for Association of Gorkha Artists Manipur (AGAM) TV, a television channel based at Kanglatongbi, was physically assaulted by some unknown group of people.

The police are doing delay tactics while lodging an FIR in connection with the incident, he added.

Basnet said that the incident occurred after media coverage of the election proceedings of new office bearers at Khopi village, Irang Part II at around 2 pm on Tuesday. When the victim along with members of the association tried to file a report, the Kangpokpi Police Station did delay tactics while filing the complaint and told them to file the complaint at Sekmai Police Station, he alleged.

Strongly condemning the act of assaulting a media personnel, the association demanded that the authority concerned must book the culprits involved in the incident by Thursday. If the culprits are not booked within the mentioned day, there will be intensified agitation, he added.

Rahul Rai in his complaint report mentioned that he was called by the members of Development Committee, MGNREGS of Khopi village and Gorkha Harup for  media coverage of the election proceedings of new office bearers on Tuesday. Accordingly, he and his camera person Mahesh Thapa of Koirengei went to Irang Part-II and covered the proceedings at Harup village, which ended peacefully.

However, while covering the election proceedings, the people who had gathered there for the electoral process suddenly started shouting and formed a mob, following which one group was physically attacked by another group with sticks and others. The clash took place in an uncontrollable manner but the fight ended after sometime.

It further mentioned that while Rahul and his camera person were returning home, they were assaulted with sticks and other weapons without any provocation. While the camera person managed to escape from the incident, a group of about 10 people asked Rahul to delete all the footage of the programme and threatened not to come again to cover and report the incident. However, with the help of some other people, he managed to escape from the scene.

Rahul Rai told media persons that media is the fourth pillar of democracy and such attack on media persons is an attack on democracy which is condemnable by one and all in the strongest terms. He appealed to the authority concerned to book the culprits involved in the incident immediately for their criminal acts of physical assault, intimidation, threat and others under law.