A consignment of 10 mt of organic Chak-Hao (black rice) was flagged off the presence of Agriculture Minister O Lukhoi on Wednesday. 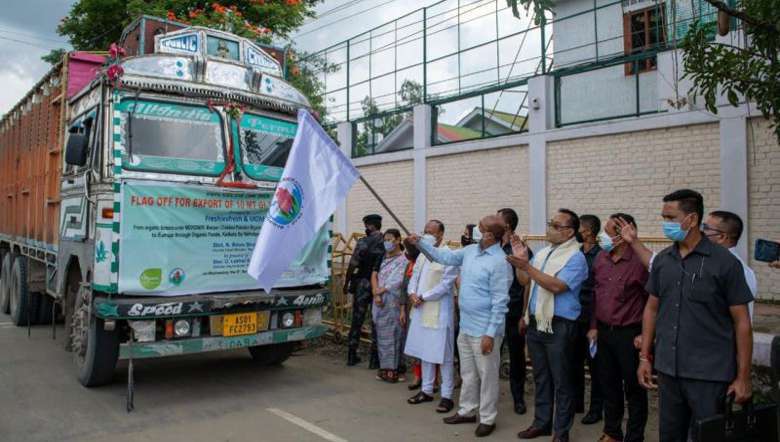 "I’m glad to flagged off a consignment of 10 MT Chak-hao in presence of Hon'ble Minister, Sh @LukhoiOinam Ji. Chak-Hao, a GI tagged crop of Manipur, is becoming one of the most popular rice. I’m happy that many youths have started ventures to market these crops outside Manipur," CM Biren tweeted.

On August 12, 2021, 1 MT of the highly nutritious rice variety was exported officially to different European countries.

CM Biren said that the opening of the two outlets in the two metro cities is a step towards providing better income for farmers while creating a demand for organic products in the metro cities.

Manipur has immense potential to serve the demand for organic products in other states and in foreign countries, CM Biren added.

"I am truly proud to inaugurate two Manipuri Organic products outlets in Pune and Bangalore along with Hon' Minister, Sh @LukhoiOinam Ji & officials. The opening of these outlets will ensure better income for farmers while creating a demand for organic products in metro cities," the chief minister said in another tweet.

The chief minister also exhorted the agriculture and horticulture entrepreneurs to apply for financial assistance from StartUp and other government schemes. MOMA has been exporting the state's indigenous organic items like ginger, pineapple, chak-hao, etc. to different parts of the country and abroad, he said. Despite COVID-19 pandemic, the state has been able to export different organic items worth Rs 68 crore in the past few years, CM Biren added.

CM Biren further said that due to constant and relentless efforts of the state government, Manipur could considerably increase production of fish and horticulture/agriculture items. Maintaining that there is need for giving thrust to horticulture and agriculture sectors for economic prosperity, he said that several tube-wells and check dams are being constructed for it in different parts of the state. He also said that organic outlets would be opened in other cities as well.

Meanwhile, Agriculture Minister O Lukhoi said that promotion and export of indigenous agriculture and horticulture products is being done with all seriousness for the first time in the state under the leadership of the chief minister. With the opening of organic outlets in different cities, state natives as well as other people would be able to test the unique taste of indigenous items of Manipur.

Additional chief secretary (Horticulture) P Vaiphei and other high ranking officials of the Horticulture and Soil Conservation department were also present at the occasion.