Two dogs were found dead in the truck which was transporting dogs from Chandel to Churachandpur. 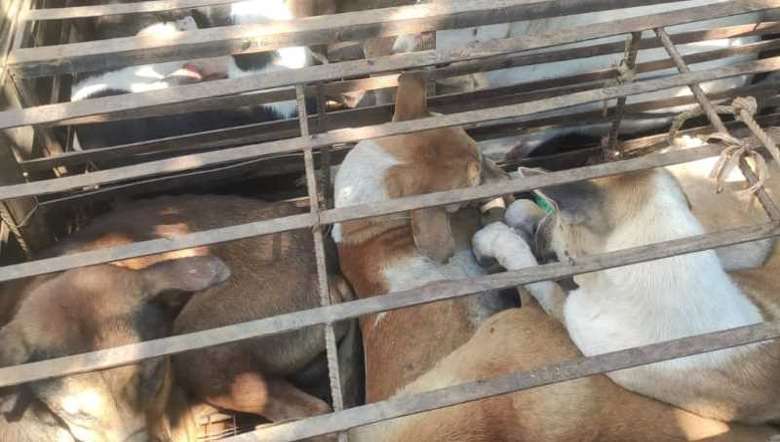 As many as 48 dogs were rescued from the possession of two persons who were arrested for transporting the dogs cramped in a truck at Serou Lamkhai in Kakching district at around 7.10 am on Tuesday, police sources said.

As per the police, at about 6:30 am, following a tip-off about miscreants transporting dogs on a truck (DI Tata) from Gamphazawl Village, Chandel district to Churachandpur district, a police team of the Sugnu Police Station and the Singtom Post intercepted one DI Tata (bearing registration MN02 6038) coming from Gamphazawl village to Churachandpur side at Serou Lamkhai along Sugnu-Chakpikarong road at 7:10 am.

On checking, the DI Tata was found loaded with 48 dogs in seven iron cages. Two dogs were found dead. They were being transported in a cruel manner by cramming them together inside the iron cages, it stated.

They stated that on questioning, the driver said that the dogs were brought from Gamphazawl Village to be transported to Churachandpur. The two persons were arrested and the vehicle was seized while the dogs were rescued. The arrested persons along with the seized items were handed over to Sugunu police station for further necessary action.

Police have taken up a case in this regard and the rescued dogs were produced before JFMC Thoubal.

The investigation officer prayed for allowing to handover the rescued dogs to the State Welfare Board Animal Shelter at Porompat and to be assisted by the People for Animal, Manipur as there is no proper place and facilities inside the Police Station for taking care of the rescued dogs. The JFMC Thoubal also granted the prayer.