Blaming Kangpokpi DC Somorjit Salam for a scuffle over land matters among others, the protestors demanded a new district administrator who can work purely for the development and welfare of the people and abide by the ethical rules. 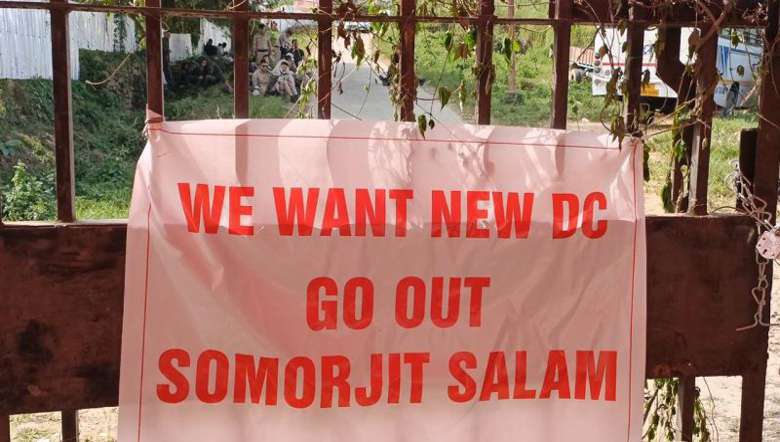 Demonstrating their anger against DC Kangpokpi Somorjit Salam, a mob closed all business establishments of the town and sealed the entire campus of the DC office Kangpokpi.

Protestors were seen locking the entry gate to the DC office, while a sit-in protest was held in front of the gate. Pamphlets written, “We Want a New DC, Get Out Somorjit Salam", "Constitution Protects Us, Somorjit Dupes Us", " Hello CM, Regard 371C, Stop Hill Grabbing", etc. were pasted on the gate and walls.

Blaming Kangpokpi DC for a scuffle over land matters among others, the mob demanded a new district administrator who can work purely for the development and welfare of the people and abide by the ethical rules.

"Somorjit Salam had been thrown out from Senapati for his unethical behaviour as a bureaucrat, but the people of Kangpokpi welcomed him to redeem himself and work for welfare and development of the people but nothing has changed on his part,” said a protesting woman.

Another protester said, “We do not accept him anymore as our district administrator and we will not allow him to occupy the DC seat anymore,” he added.

Kuki Women Union Sadar Hills president Mawinu said that no other issues will be discussed unless Somorjit Salam is removed.

Meanwhile, a reliable source informed that Chief Minister N Biren Singh had sent a representative to meet the chief association and verbally agreed to have a meeting on Wednesday at 5 pm to discuss the matters related to the highway expansions.

However, the mob expressed that no leaders should participate in any meeting or discuss any issue including the highway expansions issue unless DC Kangpokpi is transferred from the district.

They also warned that anyone found breaking the sealed gate will be held responsible for any untoward incident, while adding that protest will be sustained till Somorjit Salam is transferred.