CPI-MSC secretary in-charge RK Amusana said that that Manipur is one of the states where the price of cooking gas is highest which is Rs 1,036 as compared to Rs 1,011 in other states. 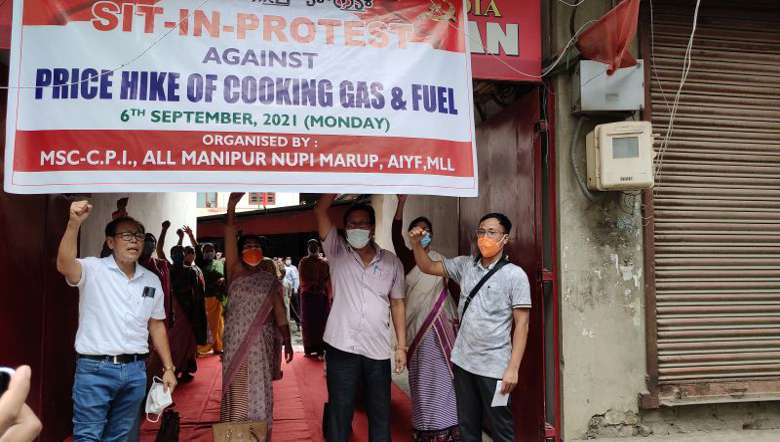 During the protest, All Manipur Nupi Marup general secretary said that amid many challenges faced by the nation due to the pandemic, prices of essential items like cooking gas, petrol and diesel are increasing relentlessly.  Such a decision of the Modi-led government doubled the suffering of poor people.

Instead of raising the prices, the government should provide these basic items at least for a few months till the pandemic is slightly under control, she added.

"In the name of providing support to the people under the leadership of the Prime Minister, free rice has been distributed. But what is the point of giving free rice when poor people are struggling to buy cooking gas," she questioned.

The removal of the subsidiary rate of cooking gas has compelled many poor people to lend out their empty LPG cylinder. If the central government cannot reduce the prices, the state government should think of slashing it down in the interest of poor people of the state as the majority of the population are economically backward.

Condemning the act of police for not allowing the use of microphones or loudspeakers in the protest, she said that they organised the protest following strict SOPs of pandemic and the government cannot restrict the public gathering organised by leaders of the state.

CPI-MSC secretary in-charge RK Amusana said that instead of supporting poor people during this pandemic, Modi-led government is indirectly killing economically deprived communities by increasing most of the essential items. It is unfortunate to know that prices of LPG have been increasing in various phases as such the present price has reached more than Rs 1,000.

He continued that Manipur is one of the states where the price of cooking gas is highest which is Rs 1,036 as compared to Rs 1,011 in other states.

"What is the reason behind pricing such a huge amount on cooking gas, petrol, diesel and others by the state government? Where has the price monitoring committee gone and what are they doing?” He questioned.

Manipur is hit hard by the pandemic and COVID-19 death cases are about to cross 2,000, however, the state does not have any health minister to monitor the situation round the clock. On top of this, leaders of the state are not holding any all political party meeting on the issues faced by the people, said Amusana